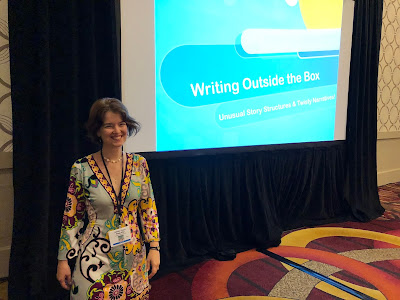 Ammi-Joan Paquette is a senior agent with Erin Murphy Literary Agency, representing all types of children’s and young adult literature. She is also the author of The Train of Lost Things, the Princess Juniper series, and picture books including Ghost in the House, Elf in the House, Bunny Bus, and The Tiptoe Guide to Tracking Fairies. With acclaimed author Laurie Ann Thompson, she is also the co-author of the ‘nonfiction with a twist’ series, Two Truths and a Lie. In her agent acquisitions, Joan is particularly drawn to richly voiced, unforgettable characters and settings, as well as tightly paced, well-plotted stories with twists and turns that keep you guessing right until the end. Visit her on the web at www.ajpaquette.com

Ammi-Joan's focus in this session is mostly on longer form projects (i.e., novels) but she advises that many of the concepts discussed could also work for picture books.

Defining story structure as the framing point, looking through the lens at your story. How are you going to tell this particular story in the way most meaningful to you? A quote she shares:


"Every story demands a different structure. No universal structure exists. It's why that mopey old saw about there being only seven plots or some bullshit is, well, bullshit. If you distill them down to their barest (and in many ways most meaningless) essencce, sure, that's true. But the art is in the arrangement. The structure you build around the plot to support the story is where the elegance lies. - Chuck Wendig

Ammi-Joan divided up the different kinds of out-of-the-box books into six categories:

2. Structure by Mosaic (smaller stories that add up to a larger whole)
Out of the box examples include: though mostly this is in adult books so far - And the Mountains Echoed by Khaled Hosseini and The Cardboard Kingdom by Chad Sell.

3. Structure by Device
Out of the box examples include: Monster by Walter Dean Meyers (in the form of a screenplay) and Regarding the Fountain: A Tale, in Letters, of Liars and Leaks byKate Klise, Illustrated by M. Sarah Klise

4. Structure by Time
Out of the box examples include: Before I Fall by Lauren Oliver (time looping) and One Day by David Nicholls

5. Structure by Deception (unreliable narrators)
Out of the box examples include: The False Prince by Jennifer A. Nielsen, Fingersmith by Sarah Waters

6. "Meta" structure (a book within a book)
Out of the box examples include: The French Lieutenant's Woman by Vintage Fowles, The Princess Bride by William Goldman


Ammi-Joan speaks of so much more, including" the tussle between craft and magic" and how the reader needs "a logical and clearly visible path through the madness" (of a complicated structure.)

Your structure needs to add something to the story. Otherwise it's just showing off.