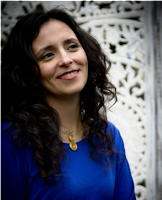 Aida Salazar is a writer, arts advocate, and homeschooling mother whose writings explore issues of identity and social justice.  Her forthcoming debut middle grade novel in verse, THE MOON WITHIN,  and her debut picture book, JOVITA WORE PANTS, will be published by Arthur A. Levine Books / Scholastic in Spring 2019 and Fall 2020 respectively. Her story, By the Light of the Moon, was adapted into a ballet production by choreographer, Isabelle Sjahsam, and artist, Roberto Miguel, for the Sonoma Conservatory of Dance and premiered in April 2016. It is the first Xicana-themed ballet in history.

The panel was moderated by Arthur Levine, who Lin Oliver called, "a deeply thoughtful person." She continued, "We all admire his list [Arthur A Levine, an imprint of Scholastic Books] for its literary merit and its contents' diversity."


What are the talismans of power that you find? Do you find you must engage in a struggle against white society
I use my writing as a tool for social change. I use that tool to construct characters that are brown, that exist in spite of--not in response to--whiteness.

We often center whiteness as the primary narrative--is if it were the majority of the world, so to speak--but the world is mostly not white, mostly not male, not straight. When we use our narrative to talk about these stories, that's a powerful statement. For me, our communities are resilient, in spite of this white American hostility.

I think there's a lot of pressure to second guess ourselves if we have identities that are part of minority cultures--to ask, is there part of me that I shouldn't show because it will be too scary? Do you feel that way in your writing, that you're censoring a part of yourself?
I am experiencing that a little bit--not with the first two books, but the next book, the work-in-progress that I'm working on.  I was formerly undocumented: I was brought here at 9 months. My communities and my family have been persecuted, disappeared, incarcerated for a misdemeanor by --we called it "la migra," but it was a form of ICE--I'm having to bear witness to that experience. It's very difficult especially given the recent headlines, but it is an ongoing wound in many migrant communities. Exposing my self in this way has been a challenge.


Do you feel those queer identities act a s second stream in your writing, or do you look at them as whole?
I'm a queer woman; I felt it was really important to create queer characters in my book.
I want them to be intersectional. I think it lends to a deeper character; it allows you to view completely, to face and overcome adversity, and gives readers a strategy to respond.


What would you like to see as readers as well as writers
I want to keep reading stories that center diverse communities, diverse worlds. I also want to see a book that deals with toxic masculinity

Posted by Adria Quinones at 1:42 PM