Lunch with... this is a new tradition at the LA conference.

This year it's Lunch with Lois, and by Lois I mean "the" Lois Lowry.

"And my next guest needs no introduction," Lin says. But Lin then shares that Lois is the author of over 40 books of all kinds, including The Giver. Lois has been a great friend to SCBWI over the years. 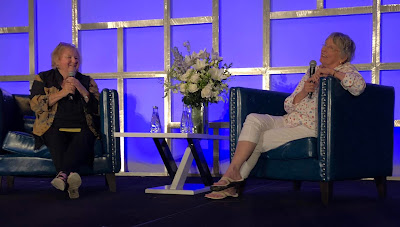 Lois arrives on stage ready to tell us a story. There's nothing better than listening to Lin chit-chat with another children's literature luminary. Almost instantly the room erupts in laughter. Join us!

Lin asks Lois how her journey in writing for kids began. Lois majored in writing and studied photography in grad school. Lois also had four kids before the age of 26. What she always wanted to do was write fiction for adults. She wrote a short story that was published in Redbook. It was for adults but it was seen through the eyes of a child. After it was published an editor reached out to Lois and asked if her if she was interested in writing for children. It had never occurred to her even though she had four young kids. But Lois did have a story she'd been wanting to write having lost a sister at a young age, so she did. Two things transpired to change her trajectory from writing for adults to writing for kids. One was the reaction of kids to that first book. The second was that she divorced and she needed to make a living.

Lois enjoys different sorts of writing. Just like she doesn't want to come to the same dinner every night, she doesn't write the same thing over and over.

"I wonder how you see your voice as a writer?" Lin asks.

"We didn't bring you here for good time," Lin says.

"If I had to choose one word it would be intimacy...Me flowing through the character. Me connecting with the reader." 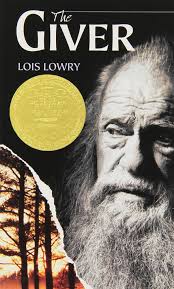 Lin asks if there is a theme running through each of Lois' books. Lois believes it's the element of human connection.


Lin asks Lois to tell us about the origination of The Giver.

The Giver was published in 1993. Lois had a son who was a fighter pilot in the Gulf War and at the same time her father was very old. In a particular visit with her father they were paging through a photo album and came to a photo of Lois and the sister who died. Her dad couldn't remember the name of Lois' sister and she had to tell him that she died.  Coming to another photo when the sisters were teens, Lois' father again asked, "What ever happened to her?" And she had to tell him again that she died. This made her start to think about manipulating the mind to forget, and the idea for the The Giver was to manipulate the mind of a community. She knew that would mean it had to be set in the future. This brought another question to her: What if...when you did that, what else would you eliminate? That set her off into story. 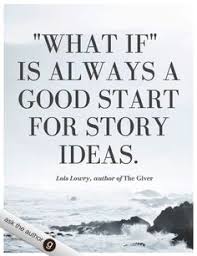 Lois never knows how her stories will end. She boldly moves forth and then boldly goes back and takes it all apart.

A perk of being here: getting to hear a bit about Lois' next book. Gripped! That's the room right now. And the gasp that just exploded--wow! Lois says this new book is more about human connection than any has ever been. I'm certain 1200 people are now waiting for its publication. The title is on the horizon but it won't be published until 2020.