Sharon Flake has written award-winning books that have been published in several languages: THE SKIN I'M IN, MONEY HUNGRY, BEGGING FOR CHANGE, WHO AM I WITHOUT HIM, and more. This fall, she releases her first murder mystery, UNSTOPPABLE OCTOBIA MAY.

She talked to us about coping strategies to use when we hit the wall creatively. When her career started, with THE SKIN I'M IN, she'd only racked up three rejection slips, and the first editor who saw the book bought it. She called it a "magical" entry into the marketplace. (The book sold 1.5 million copies.)

The Disney imprint Jump at the Sun was being launched in New York with champagne, a performance of the Lion King cast, and a talk from then-Disney CEO Michael Eisner.

"These were really good times."

For the next six books, she had open contracts with Disney, which meant they didn't need to know what she was working on. She just got to write what she wanted. 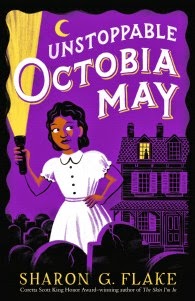 The headiness of the experience gave her a false sense of confidence that it would always be this way, and that she'd always have ideas and the support of editors and publishers.

"One day your cozy life as a writer or an author just may shift, and you most likely will not like it one little bit," she said. She hit this point with her sixth book. There was a lot of turnover with her publisher.

The foundation beneath her feet started to shift. Relationships with a couple of editors didn't work out. A third editor sent her feedback—and Sharon felt the tremors.

"For the first time, I felt like an editor did not like my work." Her heart sank. She went back to work rewriting. She worried that she'd lost her gift. She felt that she'd lost touch with that feeling in her gut that had guided her through her novels.

She heard loud rumbles of self doubt. Having a big advance put a lot of pressure on her. She'd spent her advance, but she didn't yet have a book to hand in. She had to work through it. (And her ego was wrapped up in it.)

Her editor liked a revision, but she kept on working on it and doubled the size of the book, and she thought it was the best thing she'd ever written.

The letter from the editor let her know she'd taken a really good manuscript and crucified it. It was a wreck of a novel. She'd been overly ambitious with it. And then there were more editor departures. She wasn't sure she could face another novel, so she set out to write a collection of short stories.

She kept at it, as painful as it was, learning some valuable things.  "Your creativity isn't a genie in a bottle you can pull up anytime you want to," she said. "Remember sometimes that blood is required. Sometimes everything you are and everything you have is being called on the line."

Posted by Martha Brockenbrough at 10:46 AM