Mary Lee starts off with this caveat: "We never set out to make Judy Moody a series, which is probably good and bad to hear."

Once it took hold, though, some choices in the writing and pacing of the books were very deliberate, but in the beginning that was not the goal. Megan and Mary Lee tell us about Judy Moody's Origin Story:


Megan's early works were not funny, her parents passed away when Megan was 30 and for a long time Megan's voice was fairly quiet and serious because she was in such a dark place. But in an effort to capture family memories, she grew up with four older sisters, Megan had been writing down all of the crazy, outrageous, hilarious things that had happened in her family.

When Megan and Mary met at a conference, they had an instant connection and Megan asked Mary Lee: "I have all these stories about my family that I don't know what to do with, but I want to do something, do you think you could look at them?"

From there Megan and Mary Lee worked on adding that something more and eventually Megan had a full novel.

Megan's original Judy Moody book was much, much longer and not illustrated. Mary Lee calls cutting over half of the original book like having a sour dough starter, the cuts could be used—would be used—for a next book. (Actually, those cuts were not used until book 3.)

Megan probably calls cutting over half the book mildly terrifying. But after the designer and then Peter H. Reynolds added in so many superb visual elements, Megan was in love with the book's everything and on board with all of the cutting.

Megan and Mary Lee share a bit more about the journey of Judy Moody and then give the audience some tips on creating a series. Here is one tip below, some questions you should ask yourself after you write that first, great book.

Can things be episodic? Or are you going to wrap things up in the book's entire world within the next one or two books? 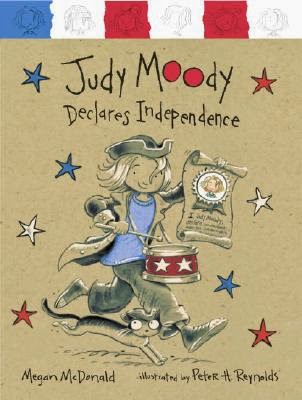 Posted by Jaime Temairik at 2:00 PM