Meg Rosoff: Warning: Peter Rabbit May Be Harmful to Your Health

Sure, sure, sure, Meg Rosoff is well known as an award-winning, kickass teen author. 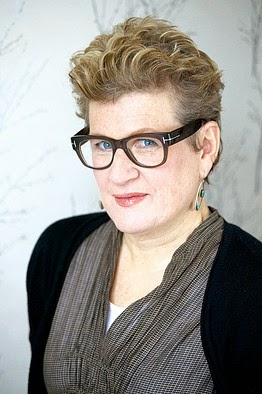 But I knew her first for her gassy, terrible, ornery wild boars.

But are these wild boars more harmful than Peter Rabbit? Let us find out, since this is the topic of Meg's conference opening keynote.

She starts us off with an annotated, revisionist version of Goldilocks and the Three Bears favored by an increasing crop of psychology professors and scientists (including Richard Dawkins). These killjoys believe that "most fairy tales do not stand up to scientific scrutiny" and that "fairy tales are dangerous." They believe it's pernicious to encourage children to believe in fantasy and the supernatural.

Meg is occasionally tempted to agree with them, and provides a personal anecdote involving her husband, her toddler and eight sets of reindeer prints that happened to appear regularly in her house at Christmas time. "It drove me insane, for one thing, I'm Jewish." She talks about having discussions with her daughter about the existence of God vs. the existence of Santa and then the Tooth Fairy. BUT truly, Meg would never ever give up reading fairy tales to children.

When Meg's daughter got older and was visiting colleges, looking at physics departments, she lamented that she'd never be as smart as the young physics phenoms they saw walking around the campus in their rarely washed Star Trek tees.

"Imagination and the ability to tell a story will make anyone better at anything, with the possible exception of politicians and accountants."

"We are 7 billion improbably designed creatures living on a ball made of iron, rock, and silicate floating in an expanse of unimaginable nothingness..." No story we make up can be stranger than the truth of that, Meg says.

Meg talks about reading A Wrinkle in Time, and how parts of it still resonate in her life today, like treasuring your faults.

"The hard core, the engine, the rocket fuel of your life, it's your faults. Remember this when you sit down to write. Try looking at all the don'ts in your life, all the stubborn, angry, unruly parts. Write something that you think no one will buy."

"Do not be afraid to be afraid... We all know writing is bloody difficult, sometimes I hate being a writer. When I get stuck half way through a book, and I always do... when I'm convinced that my career is over... I want to hit my book over the head with a shovel... and bury it in the garden in the dead of night... And marry rich."

But when it's going well, Meg admits, it is great. "Writers learn more about the world with every page we write, your job is to write the strongest, fiercest, most subversive tale you can tell. I don't care about the rules. Yes, the imagination can be very dangerous, it can change the world, and that's why we write."