Neal Shusterman is the New York Times best-selling author of the National Book Award-winning Challenger Deep; Bruiser, which was a Cooperative Children’s Book Center choice, a YALSA Popular Paperbacks for Young Adults pick, and on twelve state lists; The Schwa Was Here; and the Unwind dystology, among many other books. He lives in California with his four children. Visit: www.storyman.com 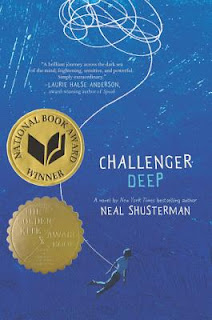 Neal's "Challenger Deep" is the winner of this year's 2016 Golden Kite Award for Fiction.

Neal tells us about where "Challenger Deep" came from. About his son's mental illness and struggle and ultimately rising above it. Not a story about his son, but inspired by thing things his son went through. He took the artwork his son had created while he was in the emotional depths, the mental depths, and built a story from that.

"Challenger Deep frightened me. ...I wanted it to be emotionally honest," and something that his son would be proud of. It took him four years to write. How he was so nervous about his editor's response, and how gratified he was by her response that it was "a masterpiece." And then he gets a great laugh when he says that praise was followed by a ten-page editorial letter!


"Challenger Deep is a call to action. To talk openly about mental illness."