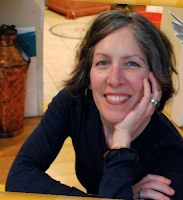 The award, named for the beloved writer Sid Fleischman, is given to the year's best funny book. Sid was one of the founding members of the SCBWI. Lisa Yee won the award the first time it was given, and she presented the honor to Molly, a debut novelist.

TEDDY MARS is about  boy obsessed with breaking world records. He'll try anything to reach his goal. "Funny, charming, and with its share of pigeon-poop jokes, this is a must-read for anyone who's ever felt out of place."

"When I found out I won this award, I immediately felt I wasn't funny any more," Molly said. (Everyone laughed immediately, proving the Molly is bonkers.)

She cried when she found out she won the Sid Fleischman award. "It's been a faraway dream that I would someday be worthy of this award. This dream ... started when I was a little kid. It means so much, and I am—to borrow a word from Road Dahl—ridonkuloulsly blissful."

Posted by Martha Brockenbrough at 6:17 PM