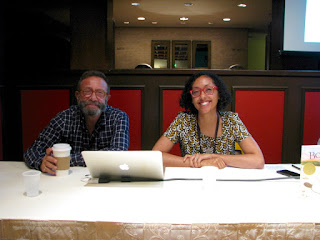 Jessica Bagley and Neal Porter’s breakout session rolled out in perfect sync. Bagley spoke about the process of creating her debut picture “Boats for Papa,” while Porter injected tidbits of his picture book-making philosophies along the way.

Bagley spoke about her early years as a picture book author-illustrator, feeling utterly alone and isolated. She made a lot of mistakes along the way, she admitted, thinking she could figure this business out on her own. Finally, she joined the SCBWI where her career began to make a change. Since then, she has soared! 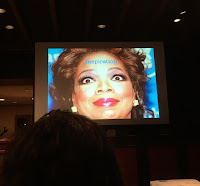 One morning while in bed, during the time when she wrote “Boats for Papa,” Bagley experienced an Oprah-like “Ah-ha” moment. She realized that her little picture book was actually the story of her own life—proving that real life shapes great stories.

Bagley went on to discuss her process of making picture books, from thumbnail sketches to final art. Neal Porter injected his thoughts along the way. An important one:

—Have a sense of who you’d like to have publish your books. Do your research. It is important to know Porters list, the kinds of books he publishes. Be sure you're agent knows his list, too, as he often receives manuscripts from agents that aren’t a good fit for his list.
Posted by Devas T. at 1:32 PM