Fiction to Nonfiction and the New Mashups in Between 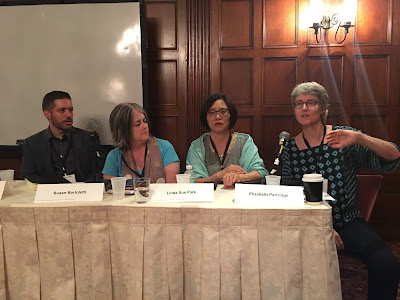 Four industry stars with four different points of view talked to us about groundbreaking nonfiction.

Susan Campbell Bartlett's career opened up when she started to do nonfiction. She learned everything she needed to know about nonfiction in a great 11th-grade English class: taking notes, research, writing. She's written about growing up in coal country, Hitler youth, the Irish potato famine, and the Ku Klux Klan, and Typhoid Mary.

Some of the best advice she's ever received, from Patti Lee Gauch, is to reach inside of yourself and find a personal story.

Linda Sue Park loves writing historical fiction, and she loves grounding it and basing it in fact. She writes stories like she cooks: there is no recipe. Her tinkering, especially with real life events she works into her books, makes the narratives better. She ended up writing fiction because she loves to change things.

A LONG WALK TO WATER is one of her mashups. It's historical fiction based on the true story of a friend of hers who was one of the Lost Boys of Sudan. She interviewed her friend for hours and read his own writing. But the part of his life that she was writing about happened more than 20 years ago, so to make it a dramatic narrative, she wrote in scenes and added dialogue. Even though she interviewed him and got quotes from him, she considers the reproduction fiction. It's recreated from old conversations, and she doesn't think it's truly nonfiction to work this way.

Linda Sue also makes composite characters out of multiple people. Their stories are true, but the combination makes it fiction. Readers have been moved by the book nonetheless, and have raised more than $1.5 million for a water charity in Sudan. The realness of the book is what resonates with readers.

She's working on a mashup with several authors, including Jennifer Donnelly, M.T. Anderson, Candace Fleming and others about Henry VIII. It's called FATAL THRONE and will be out sometime after next fall.

Elizabeth Partridge loves to write biographies. She likes characters who are difficult. This gives grit and multiple layers to work. MARCHING FOR FREEDOM was a challenging book to write because her main characters were all earnest, hardworking, amazing kids and young adults. It's about the march from Selma to Montgomery in 1965, and she wanted to choose a new POV from Martin Luther King Jr's. She found photographs of kids who'd participated in marches and tried to find names of people to interview.

A New Yorker article led her to some kids who'd taken part, and before long, she'd found six or seven kids, whom she interviewed in Selma. "If I wanted this to remain nonfiction, I would have to quote them exactly."

Steven Malk has always loved nonfiction. He was a history major in college, and when he gets to read away from work, he reads all nonfiction. Nonfiction has morphed and taken on a broader definition. There's room for more voices. "It's an interesting time." He talked about Deborah Wiles documentary novels REVOLUTION and COUNTDOWN. "She's doing something very unique."
Other writers/artists to watch are Deborah Hopkinson, Kadir Nelson, Eugene Yelchin and Matt dela Pena, Stephanie Hemphill (and more—he's an encyclopedia of books and creators).

He likes it when books open up conversations about what's fiction and nonfiction. He's a bit looser about it. As long as people are reading, that's a good thing. He grew up in his parents' bookstore, and wasn't snobby about what people were reading.

What's the line between fiction and nonfiction?

Susan Bartoletti - a book like TERRIBLE TYPHOID MARY is nonfiction. When Mary is thinking, Susan couches it in "might have thought." -

Linda Sue Park - "Facts don't interest me very much. I'm interested in truth." Facts are one tool to getting at the truth. At a Library of Congress event she met a man who wanted to read only fiction, because all nonfiction becomes untrue with future discoveries. This fascinated her, even as she depends on nonfiction writers' work to do their own.

Elizabeth Partridge - She has a hard line between fiction and nonfiction. "I will not make up anything. I will twist myself in knots to not make up something." The weather can be particularly difficult. But she's loving the mashups that are getting more and more out there. She loves how in LOVING VS VIRGINIA the author went inside the characters' heads and told the story in poetry.

"We think of nonfiction of being dry and dates and names and places. But if you can find the emotional spine of your book, it will be powerful."

Steve Malk - You need to own what you're doing. You can't say it's nonfiction if you're making up dialogue. If you say you're writing nonfiction but you don't have sources and you're making things up, it makes you look unprofessional. You need to be very clear to an agent or publisher what you're trying to do. Authors notes and backwater can be helpful, but you have to be able to articulate it for yourself when you are submitting. Don't leave that up to the publisher.

You have to be honest with yourself about your research and what you're writing. You can't rely on your publisher to vet your work.

"If you're passionate for your topic, you want to get it right. You would be unsatisfied fudging it," Linda Sue said.
Posted by Martha Brockenbrough at 12:11 PM