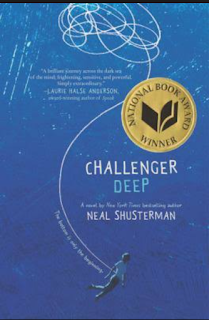 Neal Shusterman won both the National Book Award and Golden Kite for CHALLENGER DEEP, his novel about mental illness.

"What I know about world building doesn't come from books, unless you count the books I've written. I was a bad world-builder when I first started."

World building is the hardest thing we can do as writers. We sometimes learn this the hard way. He's come up with 10 rules of world building (a few of which we'll share here).

When you're writing realistic fiction, you get to play god. When you're creating worlds, you're not just playing god, you're being god. There is increased responsibility. With world building, everything is up for grabs (including gravity).

You have to live by the rules that you've created.

You can't just throw something out there and not follow through the ramifications of that. So, if everyone disappears, that means planes that were in the air crash. How does that affect your story?

For example, what are five real-world implications of reading other people's minds?


OK. What are two ramifications of knowing people's guilt or innocence?
So, you go through implications and their ramifications, and this is how you create a world bit by bit. Start with the simplest thing and look at all of the ramifications. Keep building on those ramifications and you will end up with a world that is extremely believable.

"We need to approach the world from the inside out."

When you create the world, the world becomes a character and you have to deal with that. When you're building a universe, the smallest changes have big effects. You have to be careful with that.


Posted by Martha Brockenbrough at 11:30 AM