Drew Daywalt - Does This Keynote Make My Butt Look Big? 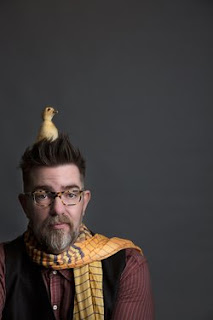 You know and love his delightful picture book, The Day the Crayons Quit, and its sequel, but did you know that Drew spent years working in film, particularly horror films?

Maybe because he grew up in a haunted house in western Ohio?He has the pictures to prove it! (They are very good photos.) Besides domestic hauntings, Drew saw STAR WARS when he was 7 and knew at that moment he wanted to make stories for the screen. He went to Emerson College and became a film major... But he happened to take a writing class from Jack Gantos (!) who told Drew he had a voice for kid's books. But Drew didn't listen. Yet.

Eventually he DID start writing for kids, on TV shows like Buzz Lightyear and Timon and Pumbaa.

But the world of Hollywood and screenwriting is pretty cutthroat and in a down moment, Drew gave writing a non-screen story a try and was looking around his office for inspiration when he saw something. He still has the box of crayons that inspired hims to write The Day the Crayons Quit, a box that was magically on his adult man desk with his other, adult man office supplies.

It may seem like Drew's NYT Bestseller List success was overnight, but like most overnight successes, it took ten years: In 2003 he submitted the manuscript to his agent, a manuscript which did not get picked up until 2009, and which was finally published in 2013. 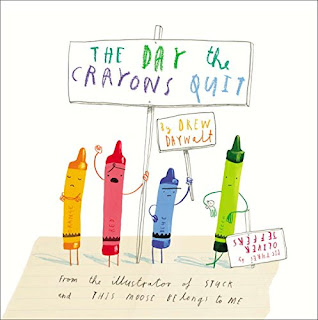 Some final quotes from Drew:

"Every story has been told, that's what you hear every day in Hollywood and here, but it's your story that matters, your voice—your princess story, your pirate story..."


"When you write something and you hand it to something, it's like standing there, buck naked saying, 'HEY! You like it?'" 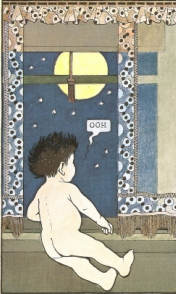