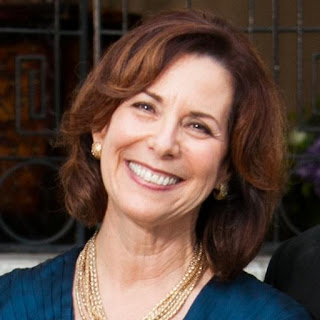 Pam Muñoz Ryan is one of the most lauded writers in the business. Her most recent book, ECHO, was a Newbery Honor and the winner of the Kirkus Prize.

"What do any of us have to share, really, other than our own truths?"

Pam talked to us about her path into writing. She didn't realize, at first, the people could be authors. She worked as a teacher first. "As a writer, I was a very late bloomer."

She published her first children's book when she was 43, and she was not an overnight success. Learning to embrace failure is vital—this was among the first of the confessions she shared with us about her life as a writer.

"Any success I've had in publishing is the tip of the iceberg of accumulated failures," she said.
"This profession is often frustrating work. But let's face if. If you are not struggling to achieve something in your life, if nothing is a challenge ... then you're setting your goals much too low."

When she was a child reader, she didn't know that her story wasn't represented in books. She wasn't self actualized enough. But her life might have been changed had she seen her own diverse background represented in a book. She hears from readers who are Latino and from those who aren't who are so glad to see Latino characters in books.

Censorship is still a surprise to her. "I never thought I'd be censored. I was wrong." ESPERANZA RISING has been censored, and even though it's been in print for years, people are still trying to ban it. The content was called "contentious, unacceptable, and dangerous" by a parent watchdog group. Kids have to get a signed permission slip from their parents before they can read the book.  (Rita Williams Garcia was also targeted.)

Some other confessions: She doesn't keep a journal. She doesn't blog (though she loves reading them). Not doing this sort of thing makes her feel guilty.

She also doesn't keep track of how many drafts she writes, how long her manuscripts are, or how many times she works in a day. She can't distinguish the writing and revision. "It's all revision," she said.

Nor does she have a muse. Momentum is far more important than inspiration. "I know where to find momentum. It's there, in the revisiting, day after day, the failing and starting over. It's there in the re-reading and rewriting."

Another confession: She doesn't write every day. She schedules her life so that there is time for "Mr. Writing." But sometimes, life doesn't allow that. "Like Ross and Rachel, we take a little break."

And finally, she has one agenda when she sits down to write. Consciously, she has an agenda, and one agenda only. "My most ardent rule, my intention and my hope ... is this. I want the reader to want to turn the page."