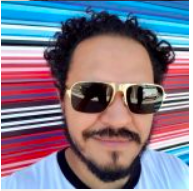 Raúl the Third is the Pura Belpré Medal award-winning illustrator of the Lowriders graphic novel series as well as the new picture book Vamos! Let's Go to the Market.

Raúl credits his interest in art to comic books, and his interest in comic books to being a kid bored during the summers in his hot, hot hometown of El Paso. His father, trying to get him out of the house, asked him to go buy a paper at  7-11, which then turned into Raúl spending lots of time out of the house at 7-11, looking at Ralph Snart comics while drinking his custom fountain soda mix of Coca Cola, Sprite, Dr. Pepper, and a dash of Orange Crush.

Raúl's mother took him and his younger brothers to the library in El Paso, though none of the family spoke much English at that time, Raúl credits the librarians at this local library with finding books he could see himself in, turning him into a voracious reader.

Fast forward a bit, and Raúl tells us about how he followed his girlfriend (now wife, fellow faculty member Elaine Bay) to Boston. While she was busy in school, Raúl would hang out at the coffee shops near Candlewick or Houghton Mifflin Harcourt offices and take part in what he called

Though SPD never resulted in a book deal! It turned him into 'that guy who draws'. Local bands started asking Raúl to make gig posters, and one of the coffee shops he drew in regularly asked if he would like to have his work on display at one of the shops.

Raúl didn't think he had enough work, or big enough pieces, to fill up all those blank walls. He thought back to something he'd recently read:

"One of the keys to happiness is to start your own gang." -- Kurt Vonnegut

So Raúl put together an art collective of friends to help fill up those walls. The connections of that collective ultimately resulted in his Lowriders series and opened up  the world of children's book illustration to Raúl. 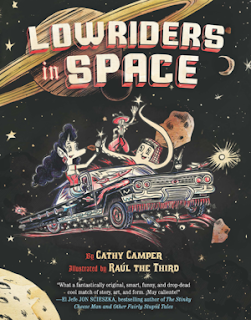 Raúl's advice for kids who want to pursue art or are on their way to college:

When you are a young artist, don't be so quick to define what type of artist you are.

He's painted switch boxes, set designs, outdoor murals, a putt-putt golf course, books, fine art and zines, and he'd never have tried all of those different things if when he'd been asked to do so, he'd thought that wasn't his 'future career path'.

Raúl's also got some good advice for zinemakers:

"Make sure you make friends with someone who works at Kinko's." 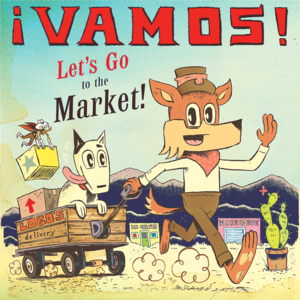 With all of these experiences making all kinds of art, Raúl wanted to start teaching other people how to do all these things, too. So he went on to teach children and adults all over the Boston area and beyond.

And this is just the partial recap of his great keynote!

Please please go check out Raúl's work with museums and other institutions in the Boston area, it's truly inspiring and groundbreaking stuff, like the And Their Families exhibition. 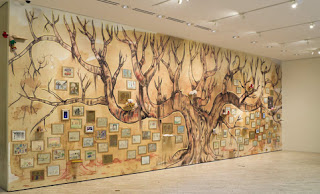 Posted by Jaime Temairik at 5:39 PM