Adriana Dominguez, a literary agent at Full Circle Literary Agency, has more than 20 years of experience in publishing. The agency motto is "representing books that break barriers and stand the test of time."

Before becoming an agent, she was Executive Editor at HarperCollins Children’s Books, where she managed the children’s division of the Rayo imprint. Before that, she was Children’s Reviews Editor at Críticas magazine, published by Library Journal. She's also worked as a translator.

Being an agent helps her put her varied background to work to help writers.

Adriana talked to us about diversity, and how and why it's a vital topic to understand. She approaches the subject of diversity with a lot of humility, and recommends we do this too.

In our industry, a lot of things have changed in the five years since We Need Diverse Books was founded. But some things haven't changed so much, she said.

Not all that long ago, she heard things like "diverse books don't sell." It was discouraging. But it was essential to keep going, because children don't see people who look like them in books, they internalize the idea that their stories don't matter.

This year, though, Full Circle Literary has had multiple bestsellers by diverse creators: The Day You Begin, Taking Flight, Amal Unbound, and The Distance Between Us.

"A lot of things have changed. That is the great news. That is part of why you're hearing so much more about diversity."

Diversity is not a trend. She wants to talk about why. "Trend" reminds her of things like vampires, or passing fads. Trends aren't an essential part of the publishing world; stories about marginalized people are.

While things are improving in terms of books being published by and about people of color, there still aren't enough books written by people with that lived experience. Also, there are more books about animal characters than there are about children of color. 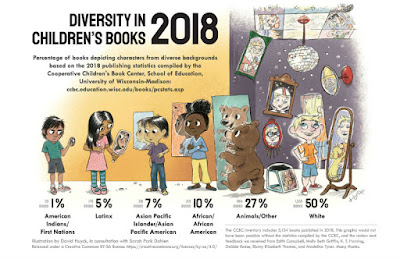 "We're still a long way to go from being where we need to be," she said.

Another disheartening stat: 5 percent of books are about LatinX characters, and 20 percent of kids in school are LatinX.

Here's what diversity isn't: stereotypical or didactic—the literary equivalent of Brussels sprouts. The books that are like this might have been the best creators could do at the time they come out. But we're past that.

She gave several ways to understand "cultural authenticity"—here are a few:

She recommended we look at some award winning books, because we need to "read, read, read":


Posted by Martha Brockenbrough at 4:47 PM