Raúl the Third (aka Raúl Gonzalez) is the Pura Belpré Medal award-winning illustrator of the dynamic graphic novel Lowriders to the Center of the Earth, as well as the other graphic novels in the series, Lowriders in Space and Lowriders Blast from the Past. His new picture book, ¡Vamos! Let's Go to the Market, is getting rave reviews. Raul is now working on a YA graphic Novel with David Bowles.

Raúl the Third took us through some of the projects he's working on
He's a believer in being able to comfortably tap into your ideas, oftentimes at a moment's notice. That means always having your tools at the ready, and true to his word, he carries an assortment of paper with him at all times in case inspiration strikes. 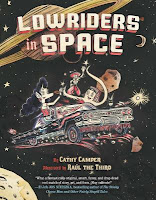 An activity he recommends is collecting things, not just in the obvious, tangible sense of collecting paperweights and whatnot, but in the sense of collecting things that we like to draw. That's how he "collected" things like rocks, nopales, and spikes in his youth—by drawing them over and over, until they became a natural part of his visual vocabulary. That visual vocabulary informs every project he works on to this very day.

In his twenties Raúl created a lot of zines, making copies of them at Kinko's and sending them out to friends, family, people he admired, and people he wanted to work with. It made the world seem smaller; instead of working in isolation, it helped him feel like part of a community of like-minded artists who were all creating their own work. That zine aesthetic very much influenced the Lowriders books, which were conceived to look like something created by a bored kid sitting in class drawing on his notebook paper, using the only available materials: Bic ballpoint pens, for example.

Many of the characters are based on himself and people from his life. Giving his secondary characters backstory gave him the possibility of going back and exploring them further, which is exactly what he's doing with his characters from ¡Vamos! Let's Go to the Market.