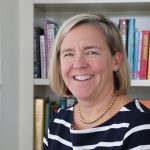 Bethany has recently been named editor-in-chief for Pixel + Ink an imprint of Trustbridge Global Media, the parent company of Holiday House and Peachtree. You may remember her from her time as editorial director at Bloomsbury Children's or VP and Publisher of S&S's Aladdin and Simon Pulse imprints, as well as having been an agent at Sanford J. Greenburger.

Bethany talks a little bit about her new house:

Pixel + Ink is bucking the trend, they don't acquire YA or non-fiction. "Our dayjob is to publish books, but we also are concurrently developing things for other media platforms like TV and apps."

"We acquire multiples in everything we acquire, we're also acquiring all rights because of our broad range of development."

Bethany says her new house is committed to long-running properties and because they put so much development into it from the very beginning, they'll take rougher pieces that other publishers might not take, they'll front-build for a long game, and want a lot of titles to be possible in a series, with those series titles already mapped out on their calendar til 2022.

What does Bethany want to see?

A series proposal with a full manuscript. They're also looking for ghost writers as they are also creating their own intellectual property.

Last words from the editor panel from Bethany:

Posted by Jaime Temairik at 3:30 PM