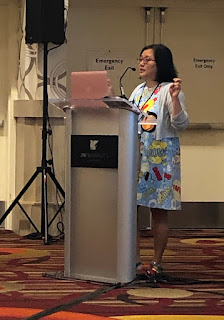 Linda Sue Park has spent her whole life hunting for tools and tactics to trick herself into writing and revising stories--a quest that has resulted in more than two dozen books, including the 2002 Newbery Medal winner, A SINGLE SHARD.

What is voice? We are always told: I'm looking for a good voice.

But what does that mean?


These are our tools as writers.

"When I go to writer's conferences I don't hear writers talking about punctuation. Why the hell not?" 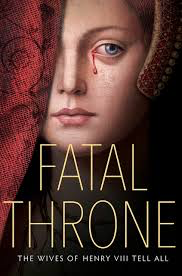 When Linda Sue worked on the collaborative book FATAL THRONE, the seven authors hit a unique problem with voice. Six authors were writing the different wives of Henry the VIII (who was written by M.T. Anderson). After turning a draft into their editor, they were told they had a problem. All the wives sounded the same. They had to tackle unique voice for each individual queen.

To make her changes, Linda Sue considered character and then took exactly what she'd written and look specifically at: vocabulary and
sentence length, which is connected to punctuation. Her editor thoughts she'd completely rewritten her chapter, though she'd only focused on her voice equation.

When it comes to STORY voice, embody it as if a character. You might imagine who is reading the audio voice as a tool. "In third person, who is telling this story?" Picture or embody this character in your head.