Simon Boughton joined W.W. Norton and Company last year to start his own imprint devoted to children's and young adult literature. Previously he was senior VP and director of publishing at Macmillan, having started Roaring Brook Press as well as helping launch First Second.

Simon had wanted to get into publishing since his time at university, his first job was at Kingfisher Books which is how he ended up getting into the world of children's publishing specifically.

He loved working with the design, illustration and production of children's book, the craft of putting books together, which is not an element you get to do much of when working in adult trade books. So Simon went on to search for jobs in the children's field when he moved to America.

Norton is almost 100 years old, but is wholly owned by its employees. It's never had a dedicated children's imprint, and Simon is excited to be at a publisher that has grown up in the 20th century and has a strong and integrated educational publishing wing.

Simon says his skill set is more for picture books and nonfiction, though the imprint will have a wide ranging program that spans a lot of categories including YA and even graphic novels. He is not interested in pre-school or commercial YA, though.

Lin asks: What is it emotionally and intellectually that gets you to pick a submission?

Simon says he wears different hats as an editor and publisher. The tangibles are many and quantifiable, he looks for books that will fit well with his new imprints existing books, he does look at cost, and if he's the best publisher for that exact book in a market sense.

The intangibles that make Simon want to acquire a manuscript are few, namely how does he feel after he closes that book?

What's a book you've published that was an unusual acquisition that defies your natural predilections?

Simon says a friend told him to meet Rex Ogle with the idea that he might have some younger chapter book ideas to pitch for Simon's new imprint. Rex sent him some proposal ideas, but what caught Simon's attention was an article he'd written about coming out for Huffington Post. From there that led circuitously to FREE LUNCH, an older middle grade novel that is Rex's memoir about his rough, sixth grade year. 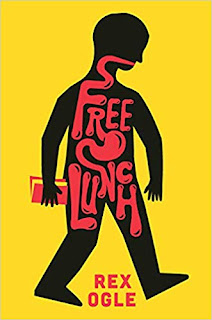