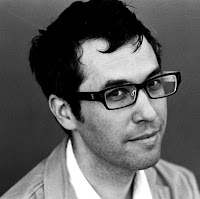 Adam Rex is a ridiculously accomplished illustrator and author. His books range from PB to YA, and his illustration style is a bit like what Norman Rockwell might have produced after a Jolt Cola bender.

In this session, Adam talked about techniques for drawing memorable characters.

He showed us some of his early art, including a decent Rembrandt knock-off (though his Santa is definitely questionable, and arguably looks more like Krampus).

Some best quotes: "I think we can get you one butt." (From his editor regarding The Dirty Cowboy.) His reply: "I didn't even take the butt."

He talked about what it looked like to see his characters from The True Meaning of Smekday as they'd been translated by the Dreamworks team for the adaptation. (The movie Home and the forthcoming TV show were based on the book.) It was disappointing at first to see the changes, but he got used to it quickly and even liked some of the changes, especially the design of the Gorg.

His techniques are so cool—he often builds models of characters and sets he uses for reference.