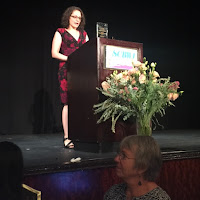 Michelle Knudsen is a New York Times best-selling author of more than 40 books for young readers, including the picture book Library Lion (illustrated by Kevin Hawkes), the middle-grade fantasy novels The Dragon of Trelian and The Princess of Trelian, and the young adult novel Evil Librarian.

This book earned her the 2015 Sid Fleischman Award for Humor.

"For writers of humorous fiction, life is a tough room," Paul Fleischman said in presenting the award. "Sense of humor varies as wildly as taste in food."

He called Michelle's book a "frothy delight" that has entranced readers. And then he presented her with a set of keys to an alternate universe where humor is as respected as it should be. 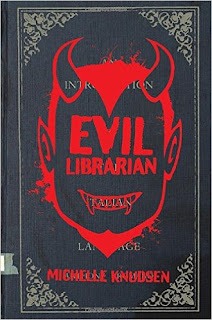 She spoke of how much it meant to her to hear from former Sid Fleischman Award winner Alan Silberberg, who reassured her she didn't need to be funny onstage (she was, though—wonderfully so).

When she started EVIL LIBRARIAN it was as a break from another book, and she didn't know it would be funny. "Once I realized I had the start of a story that was funny, I started to panic that it had to be funny all the way through."

Her mentor Tim Wynne Jones told her to stop trying to think about being funny, and just to write the story, which is about friendships and musical theater and demons (and an evil librarian).

Michelle expressed thanks to the SCBWI and a large crew of supportive family, friends, and professional colleagues—as well as to Stephen Sondheim and his hilarious disturbing musical "Sweeney Todd."

Posted by Martha Brockenbrough at 2:05 PM