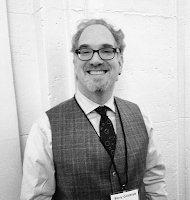 He's been an agent for 15 years, representing everything but nonfiction (although he's sold it). His client list includes Holly Black, Libba Bray, Lauren Myracle, Jo Knowles. He also represents writers of adult work (mostly science fiction), and this is evolving.

He recently signed a historical fiction graphic novel hybrid. "It was really cool and really exciting."

Brenda Bowen is an agent with Greenburger Associates, one of the oldest agencies in America. Her list has everything from PBs to YA, poetry, and some adult books (largely illustrated ones). Her clients included Rosemary Wells, Chris Raschka, Mike Curato, Hilary Knight, Samantha Berger, Jo Napoli, Julianne Moore and Nathan Lane (when they write for kids).

She used to be a children's book editor for more than 25 years, and writes books of her own as well—she's written 40 books for kids, and her first adult novel, Enchanted August, came out in June.

What kind of agent are you?

Barry Goldblatt: Becoming an editorial agent has become part of the territory. Shining something up for editors is part of the job, but he doesn't try to get things perfect because it wants editors to be able to "get their hands dirty." He considers his clients friends, he offers counseling, and he wants to be able to celebrate with his clients.

Brenda Bowen: She's also an editorial agent and does like to do therapy and handholding for clients. The Greenburger agency has lots of support for writers from rights specialists too.

What kind of editorial work do you do?

Barry Goldblatt: He isn't doing line edits and grammar. He knows every editor he works with is getting 30 more manuscripts that day. The competition is immense. He wants to make sure what he's sending is the best-looking thing it can be—and then they'll want to work on it and make it even better.

Brenda Bowen: An artist often comes to an agent and says, "I'm thinking of doing this style for the book." She talks to the artist about those choices. She also helps, when there are 20 manuscripts to consider, which one to pursue first.

What's a realistic expectation for a client, in terms of time and energy from an agent?

Brenda Bowen: She'll take a 10 PM call at home from a client. "Not that you should call them from home, but if it truly is a crisis ... I want to talk to them." The expectation is that your agent is really there for you.

Barry Goldblatt: Agenting isn't a 9 to 5 job. He works all the time on behalf of his clients.

What do you look for in a client?

Barry Goldblatt: New writers often misunderstand the power balance in the equation. "When you sign with an agent, they work for you." They give advice and you're free not to take it (but if you don't often, maybe it's not a good match). He gives his clients advice about their career—they get to choose.

Barry's clients once had a mini revolt. By offering them representation, in his head, he was telling them they were the best people. But when he gave feedback early on, he had to learn to reassure his clients. "They need to hear that!" He assumed his clients knew he loved them, but they didn't.

Brenda Bowen: It's a matter of taste. When she opens a query letter, she asks herself if she wants to have lunch with that person. She's a good agent for people she clicks with.

What's the climate in the industry at the moment? What is changing?

Brenda Bowen: There are a lot of consolidations, but there are still publishers, and publishers have adjusted to the ebook crisis. "We know that an adult ebook is taking over the space that the mass market paperback took." Since 2009-2010, a new normal has been established, so publishing has loosened the reins. They're still selective and want big books, but everyone wants to find that wonderful new thing and take risks. There is also more space for YA crossover. Things are unpredictable, but everyone still wants to capitalize on new opportunities.

Barry Goldblatt: The one negative he's seen that isn't quite receding is the focus in-house on deciding books they can get for $25,000 aren't worth publishing. He wishes editors had the space to buy special books that aren't as obvious of money-makers. "A lot of books are not six figure deals. It doesn't mean they're not fantastic books."

Barry Goldblatt: Once he participated in #MSWL (manuscript wish list chat on Twitter). He regretted it. His most recent sale wasn't something he was looking for, but it was so fantastic. "I couldn't have described this book before I got it if I tried."

The hardest thing is that you can get jaded and think nothing will knock you off your seat. But that's what he hopes for every day.

Brenda Bowen: She fell in love with Laurent Linn's illustrated novel, and even though she was too busy to take anything new on, she couldn't not take it on. She wants a book that "slaps you in the face."


Posted by Martha Brockenbrough at 10:53 AM