Varian Johnson Keynote: If It Were Easy, Everyone Would Do It 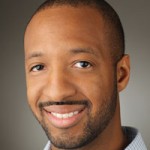 Varian Johnson is the author of four novels, including The Great Greene Heist, an ALA Notable Children’s Book Selection, a Kirkus Reviews Best Book of the Year, and a Texas Library Association Lone Star Reading List selection. His novels for older readers include Saving Maddie and My Life as a Rhombus. Varian holds an MFA from the Vermont College of Fine Arts and currently lives outside of Austin, Texas, with his family. His newest Jackson Greene novel, To Catch a Cheat, will be released in spring 2016. You can follow Varian on Twitter @VarianJohnson or visit www.varianjohnson.com.


"It's hard.
It's supposed to be hard.
But it doesn't have to be impossible."


Varian offers us tips and advice, including:

Claim it.
If you're doing the work of a professional writer and illustrator, you deserve to be part of the conversation.


He shares the story of getting the idea for his second novel, and pushing off writing it. But he learned he had to

Do the work.
Make a schedule. Writing's a job, and deserves to be treated as such.


And five years later, "My Life As A Rhombus" was published.

He shares how he juggles writing with family, a day job and life, how the first draft is for you, and subsequent revisions are for the rest of the world.

And then Varian talks about dealing with failure.

When a book contract was cancelled and things in his career seemed at their lowest, he actually wanted to quit writing, but his agent Sara Crowe wouldn't let him - she pushed him, challenging him to write something new. 100 pages of a new novel in six weeks. And he did it.
And that got him writing again. And he got an idea for something else. And he wrote it in four months. 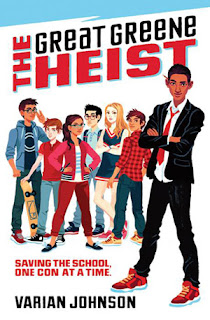 And "The Great Greene Heist" was his most successful novel yet!

which leads us to another great lesson he offers us:


And the crowd gives him a standing ovation!
Posted by Lee Wind, M.Ed. at 3:05 PM