Dan Yaccarino is not only an author and illustrator of children's books . . .

He is the creator and producer of several children's television series . . .

In his breakout session, Yaccarino spoke about developing characters for his books and television shows — The Backyardigans, Oswald, Willa's Wild Life. It was crazy fun to watch him talk about his characters, as well as interact with them as he presented.

When developing a character, Yaccarino suggests:

Characters need to be pliable, they need to motivate action outside the real of the story so that you can you easily plop them into another plot line.

Create empathy for a character by making them humanlike. At one point, it was Yaccarino's thought that Doug Unplugged, a robot, would be able to turn his head around a full 360-degrees. A bit on the Exrocists side, huh. That quality is not humanlike and will turn young readers off.

A story is merely a vehicle to showcase your character, an excuse to reveal the character over and over again. 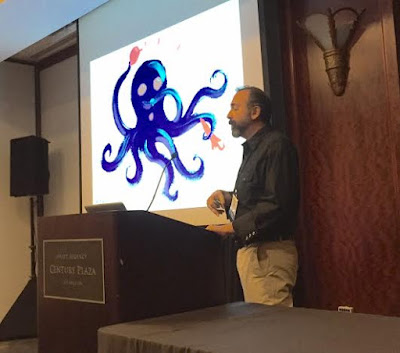