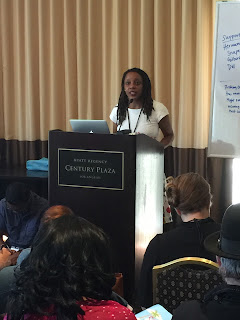 POINTE was the fourth novel Brandy wrote. She knew it was almost there because she really started caring about the characters.

Watching TV is a great way to learn about great dialogue. While watching it's helpful to assess what people do with their hands and body language. Also, close your eyes and listen to what their voice alone sounds like.

Do your characters use certain words or slang (but also be careful of these)?

Empathy is huge. Give readers a reason to care about your characters.

What Brandy worked on most when writing POINTE: detail, detail, detail, and body language. She wanted to allow the reader to imagine the characters as much as possible without giving to much detail, but Brandy's editor was often asking: Where is she? and Where are you characters on the page? She had to work on this.

The Best Friend
A Sense of the Infinite by Hilary T. Smith

Parents
Since You Asked by Maurene Goo