The SCBWI Gay (GLBTQ) Mixer Pulls In A Crowd!

25 of us - published, pre-published, and supporters, gathered at Uncle Charley's Bar to talk with Simon And Schuster Art Director Laurent Linn, Scholastic Associate Editor Jody Corbett, and T.S. Ferguson (a former editor at Little Brown) to mix and mingle and meet as a sort of professional Gay-Straight Alliance of the kid lit world. 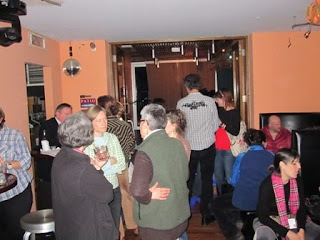 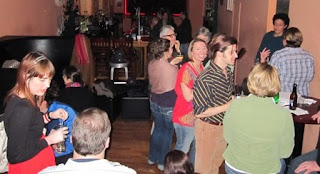 After a round of introductions and some schmoozing, we got our drinks, settled down in a big circle, and took over the bar!

Questions we tackled included "how do I handle dealing with my main character's being gay if I'm not?" (short answer: read what's out there as a starting point, with the ALA's Rainbow List and my blog both mentioned as resources.)

"How can I introduce books with GLBTQ content in my middle school to support the kids that need it, without getting slammed for it?" (short answer: Books like James Howe's "The Misfits" that have ensemble casts of main characters where one of them is Gay offer an opportunity to start the discussion of GLBTQ identity within the larger discussion of "otherness" and "us versus them." And the sequel, "Totally Joe" focuses on the gay character, which gives kids who are interested in reading more about him the opportunity to do so.)

And many questions about "Is this kind of book out there?"

We spoke about illustration and the special opportunities in illustrations to represent diversity - and celebrated Marla Frazee's recent Caldecott Honor for her illustration of "All The World" (written by Liz Garton Scanlon.)

We talked about the courage it takes to include GLBTQ characters and themes in your work, and also about how so few submissions (agented and non agented) that editors receive have any GLBTQ content. (Which led to the realization that including GLBTQ content might actually HELP your work stand out!)

We discussed the recent whitewashing controversy (where publishers put white representations of the main character on the cover of books where the character is a person of color) and how the voices raised outside the specific disenfranchised group can help effect change.

We spoke of allies and success stories, upcoming releases, and the emotional truth that all characters need to have - gay or straight!

It was a lively discussion of passionate people, and talk of future sessions on craft had the room pumped up and excited for the future.

Thanks to everyone who attended!