Can you feel the buzz in the air? The ballroom is filling up as we all anticipate the START!

That's the excitement created by more than 1000 people waiting to be inspired.

Steve Mooser, president of SCBWI, welcomes his best friend and co-founder of SCBWI, Lin Oliver, to the podium. 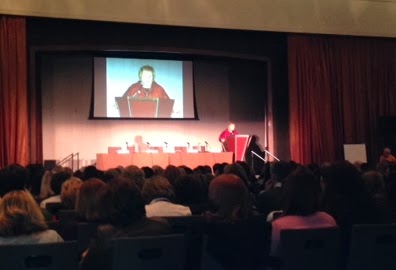 (Come on, Dakotas! When will you join us?)

From 20 countries around the globe.

A round of applause for the Regional Advisors. They are the people who make the SCBWI world go round. Thank you, RAs.

The theme of the breakout sessions this year is: Seven Essential Things You Need to Know About

Lin introduces us to Kristen Fulton, an attendee of this year's conference.

Kristen tell us there's a secret to getting published and getting an agent. For her it started with turmoil. Kristin learned she had stage 3 breast cancer when her youngest was moving out of the house. After surgery left her unable to continue her job as a veterinarian, she asked: What's next? She had always wanted to write for kids. She discovered SCBWI and began attending SCBWI conferences around the country (a lot of them). Kristen now has an agent and two book deals with Scholastic.

Here we go, everyone! The conference starts NOW.