Peter Brown studied Illustration at Art Center College of Design and moved to New York City to pursue a career as an author and illustrator of children's books. Since then he has written and illustrated seven picture books, and illustrated two others. His books have earned numerous honors, including two E.B. White Awards, a New York Times Best Illustrated Book Award, a Children’s Choice Award for Illustrator of the Year, two Irma Black Honors, five New York Times Bestsellers, and his illustrations for Creepy Carrots, written by Aaron Reynolds, earned Peter a 2013 Caldecott Honor.

Arthur Levine: What do you do when you make a mistake?

Peter: The biggest mistake of my career was when making Chowder, I did a round of art for Chowder in a new style and didn't realize until the end, when everything was done, that it wasn't working.
That's when I realized I have to plan everything ahead of time so meticulously. I spend so much time on sketch dummies these days. Arthur: Do you do something different from planning to finishes? Do you now do a sample finish?

Peter: Definitely, before I fully commit to a new style, I'll do a finished piece before I even finish the sketch dummy now. 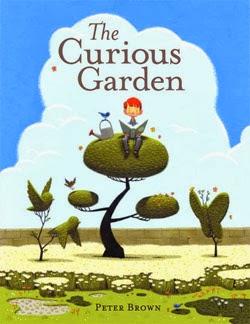 Arthur: What kinds of manuscripts are you getting?

Peter: I'm supposed to illustrate another book for Simon and Schuster, and when they sent me the Creepy Carrots manuscript I loved it and had an instant reaction to it. But for this unknown second book they keep sending me manuscripts, but none of them are striking me the way I'm feeling a little high maintenance at the moment, but I'm feeling really picky right now. 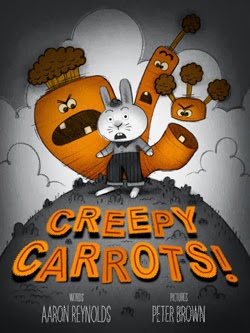 I'd be happy to see an increase in irreverent characters, the problem I see in most manuscripts is they are too of the moment, too timely, I don't want to see an iPad in a manuscript. 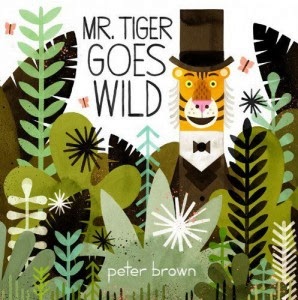 Arthur: What do you think about authors messing with illustrations and illustrators trying to mess with the text?

Peter: I think, and I'm going to start a brawl here, that authors should write art notes. I think authors should spend more time talking to illustrators and learning how to think visually.
As long as the right solution is achieved, I don't see why the author shouldn't be more involved in that.


NOBODY ON THE STAGE AGREES WITH PETER 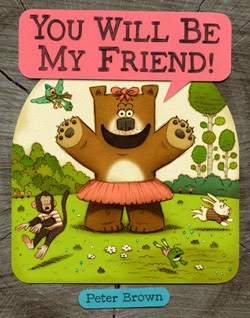 Arthur: Characterization—we've heard a lot of writers here talking about bringing character out, and we've heard some talk at the Illustrator Intensive. You guys have done it with crayons, carrots, Santa Claus, how do you find the look of your characters?

Peter: I spend a lot of time thinking about what the character is feeling throughout the book and the changes they are making and how the character design may need to reflect that. The tone of the book can really set the character style, too. 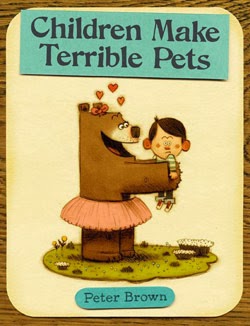 Sometimes for a character I have a person in my head and when I'm stuck I'll think about what they would do in that situation. For Children Make Terrible Pets, the main character Lucy, I would think about my niece Ella and what she would do. It's surprising how real these characters can become to you. I start making their voices...

Arthur: What's something about a manuscript that makes you say WOW?