Sophie Blackall is teasing us with a photo of her home country, a sunny beach on the blue waters of Australia.
Sophie has always been a bit of a multi-jobber, she describes herself as ILLUSTRATOR, ETC. She’s done fine art painting while moonlighting in scientific medical illustration. Taking design courses while playing with oil paints. Making editorial illustrations for business papers while also doing zodiac drawings for horoscopes.
And Sophie’s lack of job focus has made her the phenom we know and love. I had NO IDEA: that because of an illustration of Sophie’s that Meg Rosoff saw in an airline magazine, Meg eventually hired her for 9 animated detergent commercials in England, which resulted in a relationship with Meg and some of my favorite books were born—MEET WILD BOARS series! 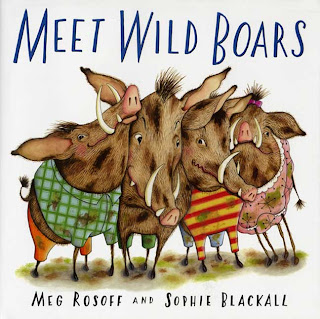 With Sophie’s first picture book job, RUBY'S WISH, things started to get rolling in the book department, but Sophie still wanted to make and paint things that don't fit literally or figuratively in picture books.
Besides making picture books, Sophie also loves to do all sorts of wild art and sculpture, painting on walls, on photographs, plates, making skeleton families, collaborating with mega-pop stars, holding collage-ish workshops in Spain, making art for the subway: 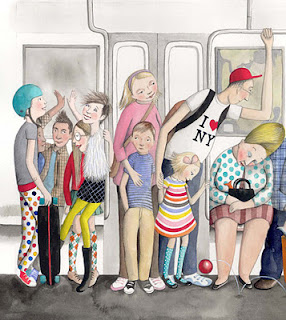 “Being an illustrator is a mostly wonderful thing... you get to choose to draw anything... set your own hours... atrophy in your basement while compulsively blogging.”
“To combat this, I leave Brooklyn once a week to go into Manhattan to see the world and meet with people.”
It was on one of these trips that Sophie learned about Missed Connections. If you don’t know about these, STOP reading this trifling blog and go see her site right now!
Sophie posted Missed Connections for free online, and when she wanted to try and get them published in a book together, many said no one would want to pay for something that was already available for free, but TWELVE PUBLISHERS wanted that book.
I love Sophie’s Golden Rule: IF YOU LIKE DOING SOMETHING, FIND A WAY TO MAKE IT YOUR WORK.
There's an opera singer singing in the conference room next to ours, which is kind of a fittingly unrelated way to end Sophie's session, just one more beautiful, unexpected note.
Posted by Jaime Temairik at 9:08 AM