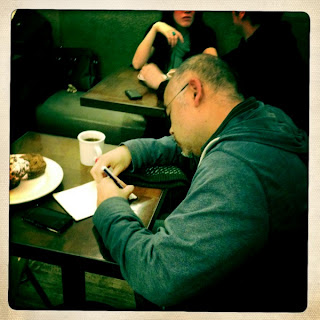 Here's Dan eating a baked good and drawing in his sketchbook yesterday morning after signing a load of books at Books of Wonder. If you know Dan, you know he's always nanoseconds away from either completing final art for a project, doing a promotional something or other for one of his published books, or eating a baked good. Here he's doing two out of three (THAT WE CAN SEE.)

This morning, Dan's telling us how to market ourselves early on in our careers and on a limited budget.

#1 Utilize free image sites like Tumblr, or Flickr to get your work out there, including final art spreads that are sneak peeks at your soon-to-be-published picture books. Dan likens it to seeing a Cinnabon sign at the mall. The more you see the sign, the more you think you want to stuff your face with undercooked dough smothered in cream cheese icing... or a picture book. Also, art directors and editors like to look on Tumblr/Flickr, you're not only promoting your books, you're potentially reaching people who want to hire you.


#2 Build a network of peers Dan really enjoyed doing Illustration Friday and thinks commenting on other sites, and commenting on your own site's comments is a courteous and important thing to do every week.

#6 If you build it they will come, but you constantly have to show them the door Dan credits John Tesh as the website genius that makes Dan's website genius. Dan repeats themes on his website (like his clone photo series, he says each photo only takes about 20 minutes and is a good way to practice Photoshop.) Dan also has a special sketchbook that he sells original pages from on his Tumblr site 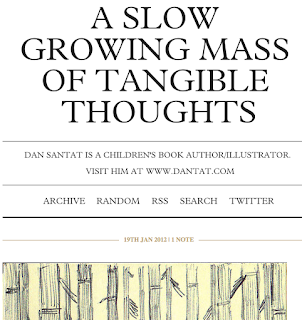 Dan's the king of viral marketing (which maybe most of us need approval for, but if you are as good as Dan, you can probably go for it!)


#10 You can do as much social networking that you want, but if your work isn't up to par, you aren't going to make it.

#11 is maybe the essence of Dan: Take what you have and do more with it, Dan says he's really not a good and helpful person that gives 150% in every flipping avenue, but he does. He practices what he preaches in dealing with family, friends, students, kids, librarians, booksellers, the media, cats.

#12-#15 Are some really juicy tips about how illustrators can use Facebook to get work!
Posted by Jaime Temairik at 8:01 AM