Chris Crutcher is the author of fourteen books -- eleven novels, two short story collections and an autobiography. He is also one of the most frequently banned authors in North America -- a fact he considers an accomplishment, rather than a drawback. Chris has been awarded the NCTE's National Intellectual Freedom Award, the ALAN Award, the ALA's Margaret A. Edwards Lifetime Achievement Award, the CLA's St. Katharine Drexel Award and Writer magazine's Writers Who Make a Difference Award.


To a sold out room of over 1,100 rapt writers and illustrators, Chris is telling us about his background and childhood. He worked as a therapist with troubled youth (dealing with child abuse and neglect and illness) for over 20 years, and he couldn't use those stories, but after a while the underlying truths became the stuff of his fiction.

He's sharing where the narrative voice came from for his books, and then the inspiration for and genesis of the character Ben Wolf from his novel, "Deadline." 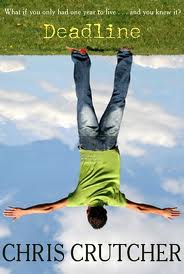 He's reading an excerpt from the book now.  The room is still, listening to the words.  Moved.  Drawn in by the spell of it.  On the verge of tears, and then laughing.

And then, Chris says,


That spiritual connection, the "what is the book about."  And he's sharing with us the moment he realized "Deadline" was about grief.

He's telling us the story of a child he encountered dealing with grief, and those of us in the room are rocked to our cores.

"The language of grief, and hard times can be pretty rugged, and we as writers need to tell them in their native tongue."


And one of Chris' best tips:

"If you're going to go down the tragic road, you want to go just as far down the comic road," explaining that you need to balance them out.


The room is up on their feet - an incredible opening keynote!