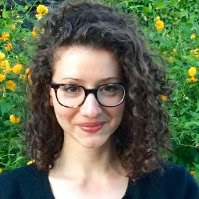 Sylvie Frank is a middle-grade and picturebook editor at Paula Wiseman Books at Simon & Schuster.

She begins by sharing a fantastic nonfiction picture book, Katharine Roy's Neighborhood Sharks asking us to pay attention for what she looks for in a great NF PB manuscript as she reads. Sylvie is looking for:

Pitch: Why should the reader care?
Grab: Is the opening scene compelling?
Plot: Is there one and not just an info dump?
So What?: What's the take away? 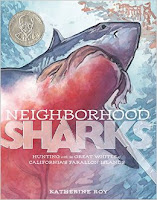 Grab: Great beginning, we are whisked right away with a shark on a hunt.

Plot: It has great structure and pacing while also packing in a lot of information

So What?: It's very focused on sharks and shark facts, but also finds a way to bring up the impact of humans and climate on the incredibly (surprisingly) sensitive shark population without disrupting the shark action story of feeding. 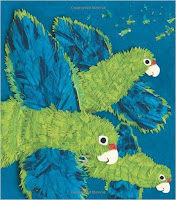 She reads parts of Roth and Trombore's Parrots Over Puerto Rico to us and we review its P-G-P-SO.

Sylvie then shows us the process of acquiring a NF picture book. She shares her pitch for Sue Macy's Mary Garber biography, Miss Mary Reporting, followed by the first draft of the story that Sue sent Sylvie, and subsequent drafts. We see how Sylvie zeroed in on finding humor and zippy details in Sue's drafts and making them even stronger. We then get to see the illustrator C.F. Payne's thumbnail dummy, then tighter sketches. Sylvie shows us the typeset dummy art director Lucy Cummins made using Chris's sketches and the notes on the dummy where Lucy and Sylvie left comments about things like how the final art would need more room/redesign for text or other issues. 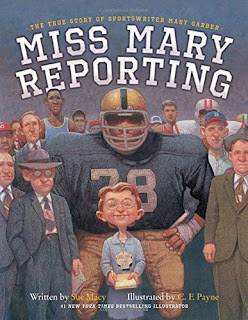 Posted by Jaime Temairik at 9:19 AM