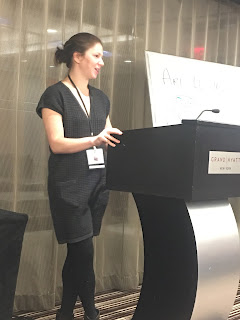 Some of her titles include Rick Yancey's bestselling Fifth Wave Series, and she recently published Journey's End, a middle grade novel by Rachel Hawkins.

She gave a workshop on World Building. Creating an immersive world that is seamlessly believable keeps readers turning pages. "The world that you're building is going to create the stakes of your story and force your character arc."

She's come across a lot of worksheets for world building, but she thinks those are more useful to look at later in the game. She started us off with a sheet to jumpstart our brainstorming. Spoiler alert: animate teacups were an option (hooray!).

Some questions to ask ourselves when we are constructing worlds: Is this believable? Why does it matter? If the topic is familiar, how will I break it out and make it different?"

We chose elements and--working with a partner--created worlds with stakes, and thought about how make these things believable. This is where she pulled the rug out from under us, after having given us things like talking teacups and astronauts to work with.

Premises can't be 20 kinds of wacky, because we need readers to believe these things our wheel. when you take on elements that are too difficult to work with, "you can spin your wheels to infinity."

Humans are wired to pick up information at locations. Let's say you're at a bar. What are people wearing? What's being served? What drinks are on the menu? These things build atmosphere. This gives context for your reader and lets them slide in without having too many questions. The atmosphere is revealed as a reader watches what a character says and does. When the author steps out from behind a curtain, this turns into a book report—which isn't as exciting as a movie.

She gave us a story scenario and walked us through the process for creating a world that works using fairies, trolls, and a pair of purloined wings by considering a number of dynamics: power structures, the economy, the presence, rules, and limits of magic.

Generally, showing a character in a world is far more interesting to read than explaining and summarizing a world.

Posted by Martha Brockenbrough at 9:36 AM