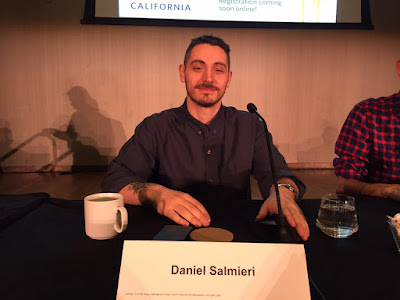 
Daniel tells us about how he got into illustration -- humorous illustration. The child of an artist dad and editor mom, he was read to every night, and loved getting lost in the illustrations.

The Stinky Cheese Man changed his perspective of what a children's book could be. It wasn't pretty or nice. It was weird, and nasty, with a bad ending…

He draws his characters a lot, and says "I try to feel what the character is supposed to be feeling" as he's drawing them so "I can draw it and get it across."


He encourages his fellow illustrators "Don't be afraid to draw anything," and lets us all know that "I mess up so much more than I get it right." But he keeps at it, and ultimately gets it.

And that's a powerful message for all of us -- whatever our creative challenge, if we keep at it, we can ultimately get it, too.


He also speaks about focusing on facial expression and body language, humor coming from the character's emotions feeling real (and the interplay between characters on the page), and lots more...


You can find out more about Daniel at www.danielsalmieri.com.
Posted by Lee Wind, M.Ed. at 8:05 AM