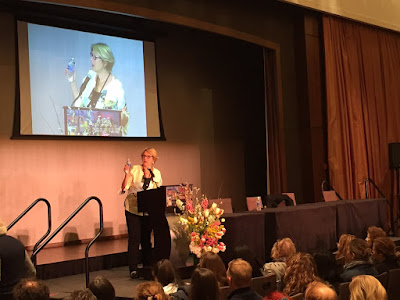 Sara Pennypacker is the author of seventeen children's books, including the New York Times best-selling Clementine series, Summer of the Gypsy Moths, Pierre in Love, Sparrow Girl and The Amazing World of Stuart. She has also contributed four books to the venerable Flat Stanley series. Her books have won numerous awards, including a Golden Kite Award and a Christopher’s Medal, many children’s choice state awards, and have appeared on many 'Best Books' lists.

Writers (and illustrators) should "lift people up, not lower them down. Writers do not merely reflect and interpret life, they inform and shape life."

The hall is rapt as Sara shares the ten most important things she's learned about writing for young people. Some highlights:

Surround yourself with people who walk with light and not with darkness ...who respond to the world with positive acts of creation.


Creation is a river. One way it's like a river is that it becomes stagnant if blocked. Do not allow that.


"Children who feel stories are a gift… feel they must give you a gift." And then she tells us how those moments  and hugs (and smashed smarties) are so powerful and meaningful to her -- and will be to us, too.

She shares her two favorite writing tips, here's one:

Leave room for the reader.


To explain, Sara reads aloud the opening lines of her book Clementine,

"I have had not so good of a week.
Well, Monday was a pretty good day, if you don't count Hamburger Surprise at lunch and Margaret's mother coming to get her. Or the stuff that happened in the principal's office when I got sent there to explain that Margaret's hair was not my fault and besides she looks okay without it, but I couldn't because Principal Rice was gone, trying to calm down Margaret's mother.
Someone should tell you not to answer the phone in the principal's office, if that's a rule."

"Take out a sentence. Let them put A and C together to figure out what B was."


With stories and advice, Sara's keynote is powerful, and heart-felt, and so encouraging.

Twenty-six years ago Sara attended her first SCBWI conference. She tells us she was nervous and green. And now Sara is this celebrated author who just rocked this keynote…


and gets a standing ovation! 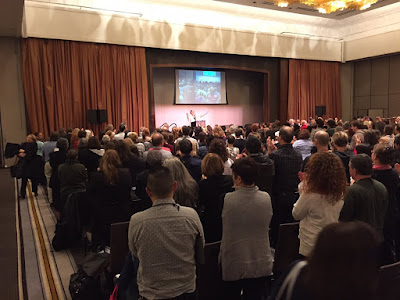