Greg is an author and illustrator of several picture books, including The Watermelon Seed and Good Night Owl, which received the Theodor Seuss Geisel Award and Honor Award respectively. His first nonfiction picture book, Tricky Vic, was a New York Times Best Illustrated Book of the Year, an Amazon Best Book of the Year, and a Kirkus Best Book of the Year. Greg’s editor discovered his work at an SCBWI conference. Greg lives in Philadelphia with his wife, their dog and two cats. Visit Greg Pizzoli online at www.gregpizzoli.com, and on Twitter and Instagram @gregpizzoli.

Greg is a SCBWI success story, he attended this conference in 2011 and submitted his portfolio to the show. An editor, Rotem Moscovich of Disney Hyperion, saw his work there, called Greg a few days later at his day job asking if he had any book ideas, and six months later, he quit that day job and has been making books ever since!

Greg says picture books are a form not a genre, they don't have rules or conventions that you necessarily need to adhere to. Be direct and keep them short, but the sky's the limit! 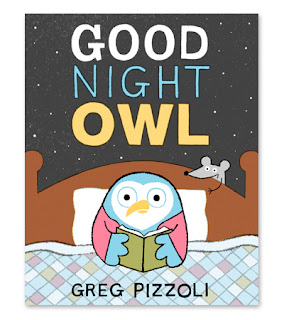 Laurent Linn: If you think about picture book readers, they are often not readers at all, they don't know how to read yet. Picture books for the very young rely more heavily on the art to tell them the story, do you approach your art-making differently?

Greg says, "I think it depends on the book. Each time I try to do what the book needs, sometimes those types of books do need the art to reinforce the text... but I don't like to have the art and text overlap too much."

" I have the most fun when the art and text are working to contrary goals. Like the mouse in Good Night Owl who is tormenting the owl and gets him to destroy his house is never mentioned in the text."

Greg's first book is about a crocodile who swallows a watermelon seed and then worries about what will happen to him/his tummy. It struck a cord with kids because they all hear from adults not to do that. Greg like to take a universal kid thing and make the Greg Pizzoli version.

Posted by Jaime Temairik at 9:01 AM