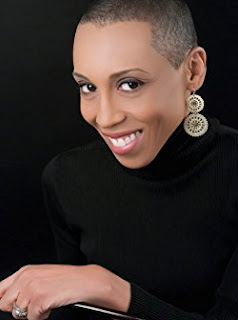 Andrea Davis Pinkney is not only an editor at large at Scholastic, she's also the author of award-winning picture books and novels for young readers. Her books have been on the New York Times bestseller list, have won Jane Addams and Coretta Scott King honors, and more. When she was at Hyperion, she founded Jump at the Sun, the first imprint dedicated to celebrating African-American culture.

She was part of a panel focusing on four different types of picture books: humorous, rhyming, nonfiction, and books for the very young.

As a child, she was inspired by the independent working woman Mary Tyler Moore represented her. So she went to journalism school at Syracuse. "I learned very quickly that nonfiction is beautiful."

This training taught her to write with economy of words to engage readers. With her nonfiction writing, she tried to sink readers into an experience. (And her first job was at Mechanics Illustrated magazine!)

She did not know then she was being groomed to be a children's book author. How did those two connect? She wants to give readers a delicious experience they want to eat. "How can I serve it up to a young reader?"

The voice. The narrative. What is the invitation in? "My job is to bring on facts, but to pack them with chocolate chips."

On writing serious topics: She doesn't pare things down for young readers. She isn't thinking of the child reader. She's thinking of telling a pared-down story that puts readers on a metaphorical train and moves them forward. "Kids are smart, they know." (Her book SIT-IN is about a 1960 protest that happened, and four friends refused to leave a lunch counter where they weren't being served.)

She doesn't want readers to know they're reading a book. They're with her, in an experience.