Jeff Kinney in Conversation with Henry Winkler and Lin Oliver

Jeff Kinney is the author of the wildly successful Diary of a Wimpy Kid series and lives in Massachusetts, where he owns a bookstore, An Unlikely Story. Twitter: @wimpykid

Lin Oliver is the co-founder and executive director of SCBWI. She is also the author of over forty children’s books. With Henry Winkler, she writes the New York Times bestselling series Hank Zipzer: World’s Best Underachiever, which has sold over four million copies. Their chapter book series, Here’s Hank, is also a New York Times best seller. This year marks the launch of their new comedy series, Alien Superstar, from Abrams Books, which debuted at #5 on the New York Times best seller list. Lin’s collection of poetry, illustrated by Tomie dePaola, the highly praised Little Poems for Tiny Ears is a perennial for babies and toddlers. The fifth and final volume of her Fantastic Frame chapter book adventure series from Penguin Workshop is a Christmas, 2019, release. A much-credited film and television writer- producer, Lin is also the recipient of the prestigious Christopher Award and the Eric Carle Mentor Award. Learn more at www.linoliver.com or follow Lin on Twitter @linoliver, or on Instagram @linoliver22.

Henry Winkler is an Emmy Award–winning actor, writer, director, and producer who has created some of the most iconic TV roles, including the Fonz in Happy Days and Gene Cousineau in Barry. In partnership with Lin Oliver, they have written over thirty books for children, including the HANK ZIPZER and HERE’S HANK series, which has sold over four million copies. Their newest collaboration is the ALIEN SUPERSTAR trilogy from Abrams. Twitter: @hwinkler4real

Jeff is speaking from a hotel, on his physically distanced book tour. Here's a picture of the long trident he uses to pass books to young readers! 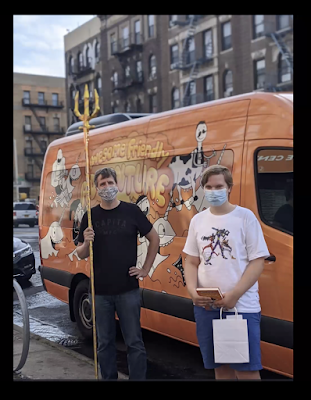 Henry puts it so profoundly, Jeff's selling over 200 million books is amazing: "From your imagination to the page to the kids' imagination."

Jeff shares that kids in China think of the characters in his books “as friends of theirs.” He's focused on stories about teachers, bullies, pets, homework.

Lin follow up with a question about creating characters that are so lovable, and Jeff explains that he originally thought he was writing the books for adults. It was the publisher who decided it was a children's book series. "The humor needed to stand on its own." There didn't need to be a 'lesson'. And so, it wasn't watered-down. The character, "warts-and-all" is what makes it so relatable to kids.

Jeff considers that there's a "bit of an edge" to his Diary of a Wimpy Kid books. "Kids recognize edge." They want to get away from the 'lesson' books and so, when his character Greg does something that gets another kid in trouble, and Greg's mother tells him to do the right thing, and the right thing for Greg is to let the other kid take the fall, that subverts expectations. (and that's funny.) And then Greg's mom takes him out for ice cream. That's causing kids dissonance. (and that's funny, too.) And then, eventually, Greg does the actual right thing.

Jeff says that he's always walking that line, wanting to avoid putting out stories that are bad for the world with the need, as he puts it: "I want to be truthful."

After 20 years of writing, Jeff finished mining his own childhood memories, and tells us that now he has to "create memories." He uses a system called "systematic inventive thinking."
Step 1: take an object, and list its components.
Step 2: use tools on each component: Subtraction, Task Unification, Multiplication, Division, and Attribute Dependency.
He uses it for humor.

An example: They fly by plane. Jeff lists the components of a plane. wings, pilot. Then he uses the tools. Take away wings. take away pilot. How do you get humor? Jeff made his character Greg a pilot in a fantasy sequence, the plane hit turbulence and since Greg didn't know how to solve the problem, he parachutes out of the plane.

Jeff tells us that for each book he writes hundreds of pages, 300-700 jokes. Then he gets it down to best 200 and starts writing.

There's so much more discussed - here's just few more gems from the conversation:

"Humor is my craft. Sometimes I hit, sometimes I miss, but I always try." –Jeff Kinney


"For Henry and me, if we're laughing, the kids will be laughing." –Lin Oliver


Thanks, Jeff, Henry, and Lin!