A Conversation with Jane Yolen, Hosted by Heidi E.Y. Stemple

Jane Yolen is the author of over 385 books and at least half of those are picture books. (She’s also written two cookbooks, six graphic novels, well over eighty novels, ten music books, lots of nonfiction, plenty of poetry collections, and has edited anthologies of short stories and poetry.) Along the way her work has garnered a Caldecott, Caldecott Honor, three SCBWI Golden Kite Awards, three Mythopoetic Awards, two World Fantasy Awards, and many state awards. She has been given six honorary doctorates for her body of work from colleges and universities, as well as the Kerlan Award, the De Grummond Medal, Smith College Medal, the Catholic Library Regina Medal, the Jewish Book Award, and an award from the Massachusetts Senate. She was the first writer to win the New England Public Radio’s Arts & Humanities Award, and the first woman to give the Andrew Lang lecture at the University of St. Andrews since the series began in 1927. http://janeyolen.com/

Heidi E.Y. Stemple didn’t want to be a writer when she grew up. In fact, after she graduated from college, she became a probation officer in Florida. It wasn’t until she was twenty-eight years old that she gave in and joined the family business, publishing her first short story in a book called Famous Writers and Their Kids Write Spooky Stories. The famous writer was her mom, author Jane Yolen. Since then, she has published about twenty-five books, including Counting Birds, Fly With Me, You Nest Here With Me, Not All Princesses Dress In Pink, and two Fairy Tale Feasts cookbooks, as well as numerous short stories and poems, mostly for children. Her website is www.HeidiEYStemple.com


Jane and Heidi are in the (virtual) house!

Jane starts us with a poem (wow!) Here are highlights of the rest:

"Because picture books are the closest to poetry as you can get." – Jane Yolen


Picture books are a way, Jane says, that "I'm able to get poetry up. A book that lifts children up, as well."

On process: Jane starts every day with writing a poem. If she "primes the pump" with a poem, she tells us, the rest of the day, her words can flow.

On compression: "Every word has to count. Most words have to move backwards and forwards. They have to resonate throughout the entire book.... Every time you revise, you'll find more words to take out. (Of course, you also sometimes find more words to put in.)"

Jane's tip: Sometimes, if you write a picture book down as if it's a poem... you'll suddenly see all the words that don't belong.

Lyricism: "a picture book can almost be sung."

Arc: "you need to go from one place to another."

Visuality: "Picture books are meant to be illustrated." Even if you're not an illustrator, "you still have to think visually."

We also get to hear the story behind Jane writing Owl Moon. 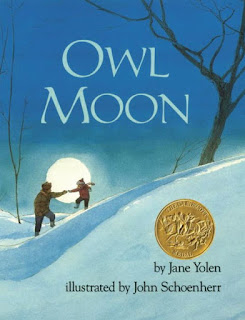 They discuss the difference between "the real, the true, and the actual." Jane advises us that sometimes an actual story from life is just an incident. For Owl Moon, she needed an individual child having an emotional experience. It's not a memoir. It's not point for point real, but it is point for point true.

There's so much more discussed, including revision as "re-visioning," the different kinds of books, Jane's productivity secret ("Butt In Chair - BIC."), and the best advice she's received.

About the work Jane puts into her picture book manuscripts:

“Sometimes it takes me longer to write a great picture book than a full novel.”

And about writing in hard times:


“Pick up what is bothering you and turn it into a little piece of beauty.” That’s what writers (picture book writers especially) can do.

They transition to the Q&A by reading a new picture book they co-wrote, I AM THE STORM, to us. It's beautiful (and beautifully illustrated by Kristen Howdeshell and Kevin Howdeshell.) 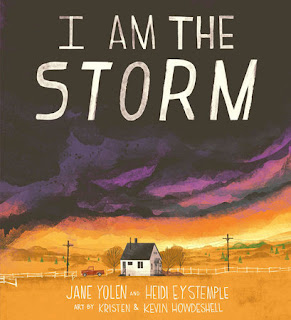 Thank you, Jane and Heidi!