A Conversation with Mac Barnett and Jon Klassen

Mac Barnett and Jon Klassen, a kidlit power couple more enjoyable to listen to surely than any Branjelina or Bennifers 1.0 or 2.0. 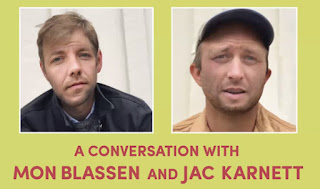 They've done SIX amazing books together and Jon jokes that they started out as friends but are no longer. Jon is teasing, of course, it's rare authors and illustrators are in touch at all during the picturebook-making process! But these two working closely together equals Caldecott Honors and Horn Book and E.B. White award stickers slapped deservedly on some of our absolutely most favorite picture books of the 21st century. Mac says their working relationship is an 'anabolized' version of the way words and art should work together in a picture book: Two simple organisms (Mac and Jon) combine to be one much stronger, better entity (like the Decepticons combining into The Devastator).

Mac reads us their book, SAM AND DAVE DIG A HOLE.

A book idea that sprang from a lighthearted discussion over heavy breakfast foods on the design puzzle of book trim sizes.

Jon had been talking to Mac about how his I WANT MY HAT BACK series was often difficult to shelve at bookstores and libraries because the books are so wide. So for fun Jon and Mac started spitballing ideas that would lend themselves well to a very tallll book. To Mac and Jon the sky is boring, thus digging down was the answer.

And the art you brainstorm when digging down leads itself very well to being a sequential image series which is another good checkmark to check on the well-made picture book checklist.

Exercise: Try taking advantage of the form or treating something like trim size as a constraint/puzzle to solve even before you pick the plot in a picture book.

Jon and Mac never start with theme or message, they always start with the characters or a visual joke, and how you push that joke beyond the joke into a deeper meaning is one way you can get to your picture book's message. Most funny ideas, says Jon, if you dig deeper on them have a sincere or sad internal, universal truth.

Another benefit of authors and illustrators working together directly, the ability of the art to change or inform the story. Their initial idea of Sam and Dave moving around and missing the diamonds was much, much more complicated visually and had an entire subplot only in the dirt of sparring skeletons and dinosaurs besides the bigger and bigger diamonds. Mac and Jon scrubbed that big, complicated side plot because not only did the diamonds by themselves get great laughs, just having the large diamonds as the art focus on a page meant the images were readable across a crowded room, which Mac says is an important thing to think about when making a picture book.

He mentions the three levels of connection in the world as they apply to reading picture books:


If your book can hit all three of these levels, bonus points to you.

Questions about authors and illustrators working together:

Even if you aren't in touch, authors and illustrators should still consider themselves as equal parts of a team. Mac says authors shouldn't say "So-and-so is illustrating my book," because a picture book is NOT your book yet, it's not even a BOOK without the pictures, so you need to think of the illustrator as having an authorial seat in the picture book making process, too. 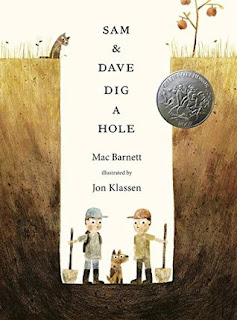