A Conversation with LeUyen Pham and Dan Santat, #SCBWISummerSpec 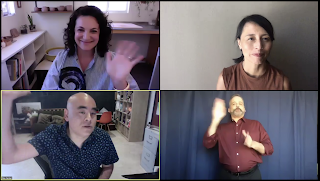 On Saturday, LeUyen and Santat were slated to deliver a conversation on the craft and process of storytelling. What conference goers received was more of an overall career master class, which included discussions on character design, layout, pacing, writing tips, and more. Each creator shared a peek inside of their work spaces, before cutting through all the BS and getting straight to the important stuff.

By the end of their conversation, I felt energized and inspired—and also downright lazy. LeUyen and Santat are the epitome of prolific, juggling up to seven different picture book projects at any given time. They also balance marriages and families and dinner and . . . tennis lessons! Turns out, I've been doing it all wrong all along. The answer to real success is: freakin' no sleep!

Okay, here are a few bullet points to recap their discussion:

When beginning a new book, Pham first designs the characters. The look of the characters will
determine the look of the book. Her styles are versatile, as she challenges herself (torture herself) to use a different look for each project. It's a way of keeping her work fresh and relevant.

Don't be afraid to start over again and again. It's okay to mess things up. Always give yourself space to change. Pham creates her initial sketches on an iPad using Procreate, throwing shapes on paper to see where they lead her. Shapes become forms, and then personality follows. Working digitally allows her to quickly create sketches while feeling free to ditch them. Working on paper feels too precious, not as easy to let go. She advises to always give yourself space to change.

Understand the principles of design, it is the most important concept to grasp with bookmaking.

Character design is all about silhouette, shape. How does a character read by it's basic shape. Are the character's shapes different one from another?

Use composition to move the audience's eye through the page. That movement needs to carry through each page of the book, like one long line drawn from the title page through the end.

First of all, Dan wanted to be sure that everyone congratulates Pham on her Caldecott win this year! Yay! Congrats LeUyen Pham! 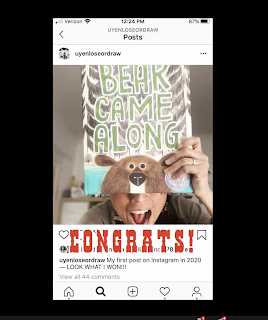 Juggling four, five, six books is no big deal for this guy. Time management is the key, though. Each project is broken down into deadlines. And each day, he gives himself several bitesize things to be completed in a day. Santat also finds it necessary to separates tasks within a particular mindset. He might paint all day. Or, he might sketch all day. Whatever he chooses to do that day, he does the easiest task first. It's like a warmup exercise.

Rest! Santat has learned to rest! After years of averaging 4 to 5 hours of sleep per night, he realized the value of rest, and a focus on his overall health. "My whole life can't be about art."

Big part of success is in curating taste--understand why something is good, or bad. For that reason, he reads his book reviews in order to understand others thinking. "You don't want to be in a place where you are stuck in your own beliefs and not open to hearing the ideas of others."


The most important thing about making a book is the concept. Take the time necessary to think of a concept that you can say it in one sentence. If the concept works, if the idea is there, everything else will fall into place.

Keep an idea notebook for journaling ideas as a way of hunting for that concept. Nothing fancy, even garbled, jumbled, thoughts. And don't be precious with those thoughts. Free yourself to say anything, no matter how ridiculous.
Posted by Devas T. at 6:51 PM