William Joyce: Books are Like the Ice Cream Sandwich: How New Technology Doesn't Change Much of Anything but it's all Kinda Cool 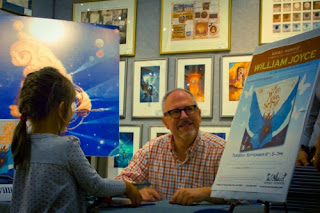 William Joyce, the creator of so many amazing books and now movies, is here! You may remember The Leaf Men, Dinosaur Bob, Santa Calls, Bentley & Egg, A Day with Wilbur Robinson, The Fantastic Flying Books of Mr. Morris Lessmore???

Joyce compares a traditional printed book to an icecream sandwich: The hard stuff's on the outside, the good stuff is in the middle.

When asked by technology companies to help them achieve true interactivity with their products, Joyce asks them what the hell they think happens when a kid opens a book.

Joyce appreciates the apprenticeship style of the publishing industry like he felt he received decades ago. Getting the time, maybe 5 or 6 years, to get to know the people working at a publisher, getting to learn how to craft a book with them by working on smaller books, forging creative projects together.

Joyce's advice: Befriend/understand/know the problems/trials/process of the people publishing your book.

"Most of the people in publishing are in it for the same reason you are, they love books."

Joyce talks about getting a phone call from a guy named John Lasseter. He knows we understand how solitary the typical children's book creator's creative daily life is. But with his film work, Joyce was excited by the collaborative nature of such projects and finds balancing both makes a much nicer work life.

After his time in Hollywood, Joyce decided he might try his hand at his own film production company, but closer to home, which is when Moonbot Studios became a reality. The idea of making an animated movie in Louisiana, he says, would have gotten you escorted from the room [to a looniebin]. But Joyce and his partners wanted to prove it could be done in Shreveport, and so they did, and in 2012 it won the Oscar for Best Animated Short. (Fun fact! They made FIVE THOUSAND MINIATURE BOOKS for this short!)

Bill describes their (Moonbot's) thought process behind making their Lessmore story app unique from both the paper book and animated short. He shares a mini tirade with us about simulated page gutters that's pretty entertaining.

Bill's advice for bookmakers looking to develop online versions of their work:

Check out his delightful Instagram feed! Here's a cool piece, don't you want to know what happens to the snowman??!! 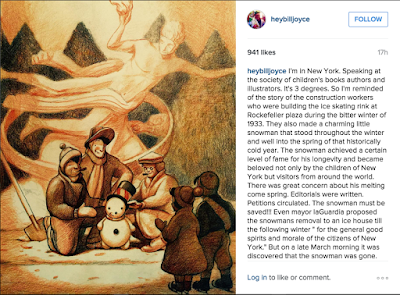 Posted by Jaime Temairik at 7:15 AM