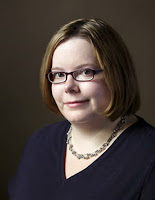 Ginger Clark has been a literary agent with Curtis Brown since 2005. She represents many genres and categories of books in addition to representing the British rights for Curtis Brown's children's list. She's lots of fun on Twitter, and from there you may have learned she's really into wombats and Peter Capaldi, but aren't we all?

Sarah Davies and Ginger Clark tag team on describing how a rolling auction works. All of the bidding publishers give their bid, and then the lowest bidder is asked if they can match the highest bid, and the other bidders are approached in turn, and this can go around a few times, perhaps up to seven rounds.

Compared to a best bids auction, where Ginger asks for editors to name their ultimate bid and no additional rounds of bid-taking happen.

For most books Ginger has sold she's initially sent out the submission to 12 editors. In special cases she's sent the submission out to upwards of 27 editors (and she notes that 25% of those 27 were at Penguin Random House, which is the strange reality of big houses merging into even bigger houses these days).

The most important 'gets' in a contract to Ginger are:

Translation rights, British rights, audio rights, joint vs. separate accounting on multiple book deal royalties (you want separate accounting!!) Ginger will only take joint accounting deals unless there are no other offers OR the publisher is offering them an insane amount of money. Other than that, deal-killers are up to the client, says Ginger.

Posted by Jaime Temairik at 9:20 AM