An In-Depth Interview with Rainbow Rowell 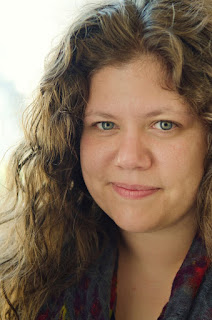 Rainbow Rowell (rhymes with towel) is the beloved bestselling author of books for adults and teens.

SCBWI executive director Lin Oliver, herself a bestselling author, conducted a warm fireside chat with Rainbow about her books and her life. And yeah, there really was a fireplace projected on the screen, because the SCBWI does things right.

Here are some of the highlights:

Rainbow started her career as a journalist and columnist for the Omaha World-Herald. There were some useful things. For example, she didn't get writers block. "At a newspaper, writer's block means tomorrow you're fired." There were also some downsides—working as a journalist was hard on her writerly voice.

During that time, someone asked her what sort of writing she was doing for herself, and after a while, she realized the only writing she'd done for herself was love letters—that may or may not have been read. ("Mine were too long. They needed editing.")

She started writing THE ATTACHMENTS to do something for herself. She wrote that in third person past tense.

CARRY ON, though, was written in first person."I think when you're writing first person, you're really writing monologues," she said.

Her characters have little pieces of her in them. "Human beings are more complicated than fictional characters, and there's enough of you to split into seeds (which become the characters of your books)."

As she writes, she doesn't think about how they're being marketed. ELEANOR & PARK was released as an adult title in the UK, where it "bombed," as hard as it is to believe that. St. Martins Press published it as YA in the states—and Rainbow says they were the only publisher who wanted it. It might have been different had they taken it to YA publishers instead of adult. St. Martins does both.

Her agent describes her work as "funny/sad," which means it's sad but still makes you laugh a lot. "It's so much harder to be funny than it is to be sad," she said. "You can read the newspaper if it's sad. I personally like things better if they're both."

"Sometimes the pressure of writing makes you want to sound official, so you aspire toward something that's not you because it sounds more professional," she said. When she was a journalist, she used to imagine telling the stories she was writing to her husband or her mom.

When writing fiction, she gave herself permission just to write—not to go back in and edit and change things. If it made her laugh, it was good enough.

Lin observed that many of Rainbow's characters seem to be outsiders. But to Rainbow, more people feel like the outside than feel on the inside, especially young people.  It wouldn't have occurred to her to write people who don't feel this way. "It's who we are."

Rainbow likes to talk about her characters with her agent. The characters appear to her pretty well formed and compelling. But talking to good listeners who don't try to build on her characters, and instead just let her develop them, is helpful. She adds details as she's talking about it. She also builds playlists that help her fill her characters out a bit.

Sometimes her characters don't do what she expected them to do in scenes. She gets to know them better as she writes.

CARRY ON has Star Wars, Superman, Harry Potter and Twilight references. It's a book she wrote for people who had some of the same pop culture references as she does. This meant she didn't have to explain a lot of references, but that she could also play against people's expectations.

Rainbow has a lovely and resonant philosophy about her characters and their stories (and about human beings in the real world too): We're all good people trying hard. And there is value in trying hard.

She shared so much advice and insight for us and really showed us where her magical books come from: her generous heart. Her voice on the page is her voice in real life. If you haven't read her books, you're in for an extraordinary experience. Move them to the top of your pile.

Posted by Martha Brockenbrough at 1:32 PM