I'm so excited about this session! Rainbow Rowell is the New York Times bestselling author of the Young Adult novels Eleanor & Park and Fangirl and Carry On. She's even received a Printz Honor for Eleanor & Park!*

Martha Brockenbrough is our very own team blogger, author of the YA novels The Game of Love and Death and Devine Intervention.**

They're talking about Creating Teen Characters, and you'd think it would feel like this: 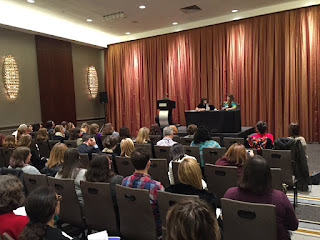 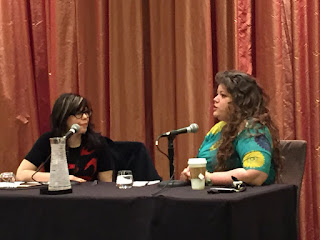 "I don't think about audience... I can get stalled."


They both worked as journalists, and Rainbow spoke of the good training that was (like how it was great for dialog and made her not so precious about her writing) and the challenges that same background created (her voice got "slammed out.") Rainbow joked about her contemporary realistic novels,

"What I'm doing is journalism, but lying."


Martha played the song "Hast Thou Considered The Tetrapod" by The Mountain Goats so we could all hear a bit of it. Rainbow then told us about how the song (and the whole album) inspired her novel Eleanor & Park, and "how it unlocked me." They spoke about different tools they use to get into the writing. Martha used period photos for The Game of Love and Death. Rainbow uses music as a "shortcut to get back to the emotion of that scene," describing a particular scene from Eleanor & Park and how it had a specific song.

They spoke about diversity of characters, aspirational characters versus real characters, and Rainbow's breakthrough in writing fantasy. It was a great story, about research and tropes (and playing with tropes) and how Rainbow ultimately realized that for fantasy, "I've read enough to find my own voice in it."

There was so much more, and Rainbow also answered questions from the rapt audience.

Speaking about today's teens versus the teens of the 1980s, Martha Brockenbrough said,

"We've been this age, we know what we need to know."


Telling us of a particular character she found challenging to write, (Agatha in Carry On), Rainbow said,

"As an author, you need to find your way in."


And then she explained how she found her way into Agatha... So fascinating!

What a breakout session!


*Check out all of Rainbow's titles here.