The Writers Intensive - An Inside Look, part one - the set up 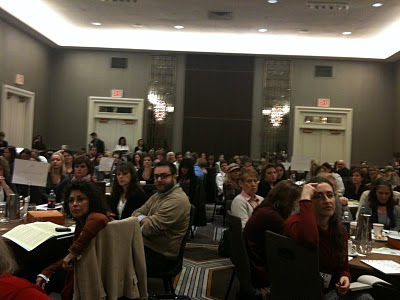 Okay, the room is anxious.

My fellow authors at my table are anxious.

Yes, of course, all the writers here are hoping to be "discovered," and the room perked up noticeably when Liz Szabla, Editor in Chief of Feiwel and Friends (Macmillan) said of the intensive "This is a place where I have found gold." And she told us that she was working on second books with two authors she'd found right here!

90% of the room raised their hands when Lin Oliver asked if they felt they had brought work that was ready to be published. She said she would re-visit the question this afternoon after the two critique sessions, and predictions are... that number will drop.

No one wants to think that their work isn't ready. (And that's an important distinction - not that YOU as an individual aren't ready, it's about YOUR WRITING.)

But no one at my table wants to think their work isn't ready. (And it's hard to separate out your own ego from being having your work critiqued!)

But get this: Julie Strauss-Gabel, Publisher, Dutton Children's Books, when speaking on the sharing of our work with the editors and agents at our tables, said,

Today is not just about whether we like it or don't like it, it's really "to see what's there to help you build on."

And I think that's really key.

And the last thought echoing in my head as we launched into the first critique session was this great advice from Julie Strauss-Gable, "the value of the experience today is not just when it's your turn" - meaning that there's a lot to learn from being engaged and listening to the critiques of the other writers' works - what the editor or agent at the table has to say to them, what you can learn from those other manuscripts' highs and lows.

Stay Tuned for my post on the morning critique session!