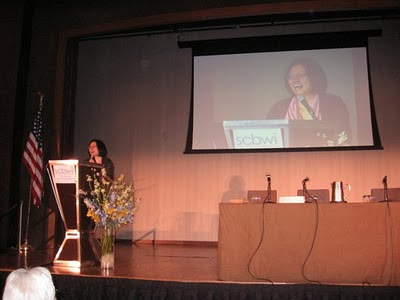 Last night, hanging out in the hotel bar, a group of us were sharing stories of the most horrifying food we'd ever eaten. The answers were all funny, and yuck-inducing, but when Linda Sue Park was telling her story - it was like magic descended on the table. We were whisked across the globe, into a restaurant in Korea, plunked at the table with her, handed a hammer and a rock, and watched - no, experienced her smashing it open with a hammer to reveal not a geode... but some sea creature's flesh. Honestly, we were spellbound! (And there's a lesson there - don't just stay in your room after the conference sessions, but hang out in the lobby, go to the hotel bar, mingle with your fellow writers and illustrators and who knows what great conversations you'll be part of?)

Back to the Keynote. Nobody tells a story like Linda Sue Park. The people who choose the Newbery Medal think so. Readers all over the world think so. And like a relay race with the swiftest runner last, SCBWI has handed her the conference baton and tasked her with taking us towards the finish line...

After writing eight picture books and nine novels, she still thinks every book she writes will be her last. And the problem gets worse with each book.

And hundreds of school visits and presentations... but she still gets nervous. What if I lose my place? What if they don't like me? Every single time.

She urges us all NOT to believe in ourselves. If we're like her, we have doubts. Instead, believe in the work.

She's doing a bit of what she does in her school visits - and we're imagining we're a room of (a thousand plus) ten year olds. And she's weaving a beautiful story of her childhood and the fortune game played on a Korean child's first birthday.

And she's explaining now that when she's doing the school presentation, she's not nervous - she's focused on telling the story.

Similarly when she's writing, she's able to do it because she's focused not on herself and her doubts, but on telling her story.


She's telling us about writing her latest book, "A Long Walk To Water." And how she didn't need to believe in herself to write it - she needed to focus on the story that she had to tell.

And now, (drumroll...) Linda Sue Park's definition of "voice," and it's going to sound familiar:

The best words in the best order to serve the story.

and use those tools in service of the story.

And focusing on that task brings her work down to a manageable level. She sets a daily goal - work on that scene. make that list. Choose the best words in the best order to serve the story...

Linda Sue calls out to us all to believe in the power of story and the strength in focusing on our craft to change our own stories...

and she looks forward to the stories that will come in the years ahead from the more than one thousand writers and illustrators in this room!

And with that flourish, and a standing ovation, we burst through the tape and cross the conference speaker finish line with Linda Sue...