Always a highlight of the conference, the LGBTQ Meet and Greet was fantastic. Aaron Hartzler set the scene with a great story that really pulled the group together and spotlighted how important it is to talk about LGBTQ issues, and keep talking about them.
Lee Wind did a fabulous job framing the questions and keeping the conversation interesting and enlightening. Joining Aaron and Lee were Ari Lewin, editor at Putnam/Penguin and agent Jim McCarthy of Dystel & Goderich. 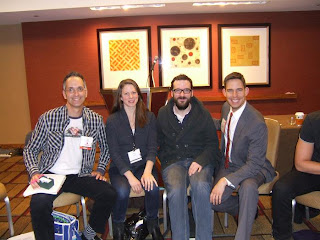 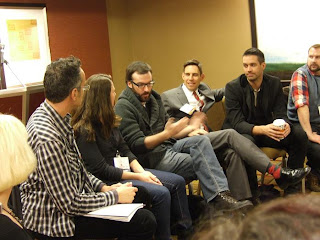 Lee opened it up for question from the over 50 attendees. Someone asked if they thought lesbian characters were underrepresented in YA, and Lee mentioned his blog and his thorough list of spotlighted books with gay and lesbian characters. 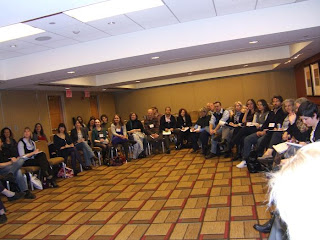 A great moment came near the end when Lee pointed out to the crowd that writing novels with LGBTQ themes and characters is a huge opportunity in publishing and should be seen as such.
When asked what they were looking for, both Ari and Jim want a book that stands out and is well-written. But Ari did hope to see more teen romance in LGBTQ books.
The event was casual and inclusive and the attendees were engaged in conversation about the current state of LGBTQ literature. Afterwards, many of us hung around to chat--keeping the good vibes going. 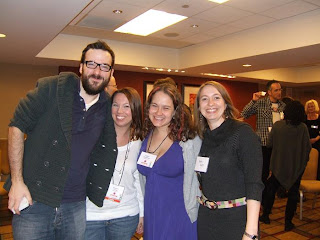 Great time! Can’t wait to do again this summer in LA!!
Posted by Suzanne Young at 4:00 PM