Welcome to the 2010 Summer Conference #la10scbwi 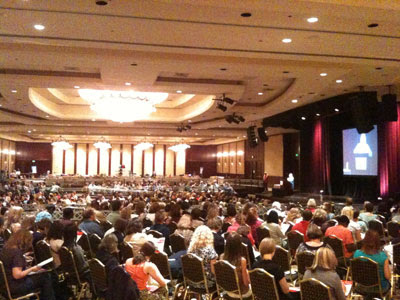 Lin Oliver is explaining to us how these conferences are organized, and for those of you who didn't make it this year, it's a great way to understand some of the benefits of this gathering:
Lin is so funny and welcoming--if you haven't seen her speak in person before, you're missing out.

One annual tradition is to introduce the faculty with a bit of heroic music. This year, they're walking into the Indiana Jones theme song. Alas, no one seems to have brought a whip. Last year, Arthur Levine offered up a belt to a person in need. Arthur, would it have been too much to bring a whip?

We also traditionally ask faculty to offer up one word. Apparently, it's hard to choose just one, but we'll be tweeting some of the selections. Lin started things off with "showtime"--a great choice.

In case you were wondering, there are a record 1,136 people at the conference this year, coming from most states in the U.S., and many countries outside of the United States. (What up, Delaware and West Virginia? We missed you this year.)

Of the people who revealed their gender when they registered, there are 442 women and 62 men. Everyone else is named Pat, Sandy, Lee or Leslie, which means no one can tell. Just looking around though, there are many more women than men, which makes this quite possibly the hottest pickup spot in Los Angeles right now. Or not.

We also have in attendance one professional nail biter, an opera singer, and a pirate. They will be walking into the lobby bar tonight; a joke will follow. Also, there is a zombie cheerleader, and we aren't certain whether that person cheers for zombies or eats the brains of the chess club (the very best kind).
Posted by Martha Brockenbrough at 9:05 AM