Eddie Gamarra and Michael Reisman: Good Books… but are they good for Hollywood?

Michael Reisman is the author of the middle grade Simon Bloom series. He’s been working for over 11 years as a story analyst for various movie and TV companies.

Eddie Gamarra is a literary manager/producer for The Gotham Group. 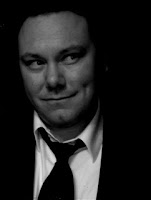 I'm so happy that I was able to attend this breakout! It was like my own insider look at the movie industry. And that means I can't really share some of the secrets. But at the next conference, this is a session you don't want to miss!

They provided an awesome handout that described the elusive term "High Concept" as an easily-described an easily-grasped concept. Then the paper went into Suggested fate of a book/script/treatment in coverage, Movie deal scenarios and the definitions of various terms that deal with the industry.

It also had a ranking of book adaptations with their studio and lifetime gross.
And to pull it all together Michael and Eddie were like a comedy duo up there. They had the room in hysterics. Can I go again tomorrow?